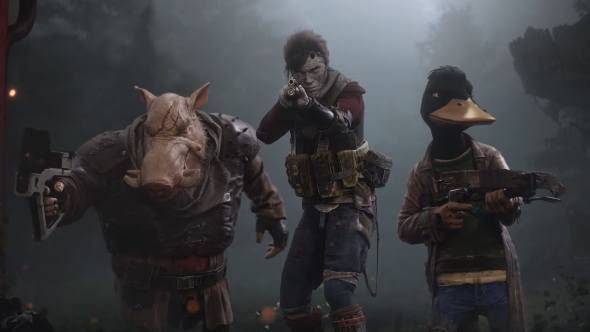 “There’s a tradition in Swedish roleplaying games of ducks being a character class, so this is a little nod to that,” Mark Parker, producer for The Bearded Ladies, says. He’s discussing Dux, the top-hat wearing giant mallard in Mutant Year Zero: Road to Eden. Dux, along with a brutish talking hog called Bormin, make up the animal leads in this tactical RPG, and signal from the start that this is a different kind of isometric roleplaying universe.

“In one of the expansions for the Mutant pen-and-paper game there was the introduction of anthropomorphic characters, and we found those to be an interesting character to use rather than just a standard soldier,” Parker explains. “So we picked some cool animals to make into characters for the game… There will be at least one additional animal mutant in the roster of unlockable characters.”

Jump into the best strategy games for more tactical action.

Dux and Bormin are joined by Selma (a stone-skinned human), and the trio make up the party used for Mutant’s E3 2018 playable demo. While it’s only a tiny slice of the game – a single combat encounter – the demo reveals the punishing difficulty level, and how the inventive blend of real-time exploration with turn-based combat lays the foundation for a great isometric stealth game.

At first glance, Mutant Year Zero could be seen through the same lens as Divinity: Original Sin, or the Shadowrun games: the world is explored in real-time, and entering turn-based combat is a seamless transition that lays gridlines over the environment. But while the broad setup is familiar, the intricacies are not. There’s an emphasis on stealth; enemies in the world walk along patrol paths akin to Metal Gear Solid foes, with a radius around them highlighted to warn you of their detection field. Get too close and they’ll initiate battle, calling on their nearby allies to rush in and decimate your tiny team.

To avoid this, you are equipped with silenced weapons, the ability to hide behind corners, and a handy ambush mechanic. Get your team into position, wait for an isolated grunt to walk into your trap, and then a tap of the spacebar will begin combat and allow you the opening moves. With any luck, you’ll be able to quietly elminate them without alerting anyone else, and continue to rinse and repeat the tactic until the zone is clear of foes. There’s a little of Invisible Inc.’s rhythm to this, and that’s no bad thing.

As with all turn-based tactical games, positioning is of paramount importance in Mutant Year Zero, something I quickly discover as Bormin is riddled with bullet holes due to being left in an awkward position at the end of my turn. The Mutant universe offers more options than just rusty guns, though; powers can really help you gain the edge in the battle for prime locations.

“We’ve got moth wings, stone skin, and one mutation where you can control the trees nearby and wrap their roots around enemy legs,” Parker says. “I really like the super jump. You can jump really far across different areas, up to high points to get a good vantage point.”

When combat does explode and get messy, these powers are the elements that can help turn the tide. Like in XCOM, buildings are perfect cover in Mutant Year Zero, but a well-placed grenade can blow open walls and expose the thugs within. There’s no better vantage point from which to hurl an explosive than flying high above the battlefield thanks to newly-sprouted moth wings.

The E3 session demonstrates a robust combat system, and the stealth aspects offer a new angle that hasn’t really been explored in isometric RRGs before. But I found myself wanting to know more about the world and characters, and at current I am unsure if Mutant Year Zero will deliver as strongly on these elements. 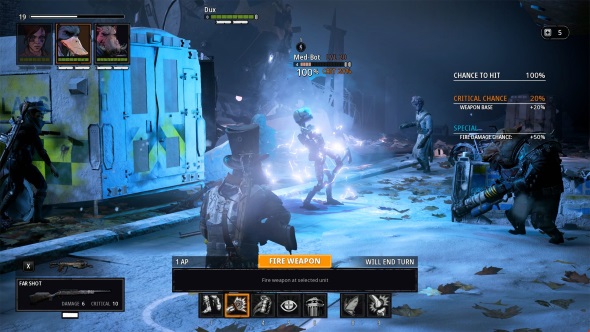 “In tabletop games, your imagination is literally the limit to what you can do, so we can’t really do all of those features 100% justice,” Parker says when I ask about the challenges of translating a pen-and-paper RPG into a videogame. “So we made a tactical game where it’s a bit more of an adventure tactical game, rather than a one-to-one RPG, because that was a very difficult thing to emulate. We knew our limits from the start and we worked with those to make an enjoyable game that I think everyone who likes the pen-and-paper game should also find enjoyable.”

While I’ve not played the original pen-and-paper Mutant RPG, I have played Shadowrun and Dungeons & Dragons, and found that, predominantly, the enjoyment of these games comes through exploration of the world and social roleplaying, as opposed to combat. As such, I do wonder if Mutant Year Zero being predominantly turn-based tactics will fulfill the existing fanbase’s wishes. Parker informs me that while the game has side areas, there’s a single story thread to follow, suggesting the game is a mostly a linear tactics game rather than an RPG in the traditional sense.

Yet, despite suggestions that it won’t directly translate the experience of the original game, I still find Mutant Year Zero: Road to Eden interesting. We don’t have many tactics games that are story focused, and this rusted, animal-run future seems a great setting for one. The real-time stealth ensures that there’s an additional, thoughtful layer, and one that encourages a very different experience than what is offered by XCOM.

The top-hat wearing duck is still the reason I’ll be playing, though. There’s no feature more fascinating than that.