Japan has a funny relationship with the concept of ninja. Portrayal of them ranges from ‘sneaky spy in black pajamas’ to ‘earth-shattering technicolor wizard’. At the furthest latter extreme of that scale lies the Naruto franchise. This almost inescapable manga/anime phenomenon ruled kids & teen’s TV for years, unsurprisingly spawning a massive number of licensed videogame tie-ins. The surprise, then, is that some of them were shockingly good, and now they’re on PC.

Prefer your ninjas more on the sneaky and shadowy side of things? We’ve got you sorted, too.

The Naruto Shippuden: Ultimate Ninja Storm series (to give them their full name – we’ll just be using Ultimate Ninja Storm here) are largely agreed to be the pinnacle of licensed Naruto games. Four titles – with some non-essential spinoffs – developed by Asura’s Wrath studio Cyberconnect 2. Notably, these four games cover (in abridged form) the entire Naruto storyline from the very first childlike adventures of the orange-clad ninja teen all the way up to the absurd and bombastic god-slaying finale, and even a little beyond.

For the longest time only the final two games were available on PC, but as of the release of the Legacy pack all four are available, remastered and improved. Most notable is the upgrade to 60fps – the console versions of these games are capped at a ‘cinematic’ 30fps, which works decently enough, but they look vastly nicer on PC now. You’d be hard pressed to believe that the first two games were PS3-era titles. Oh, and purists will be happy to know that you can pick from Japanese or English voice tracks in all four games.

The Ultimate Ninja Storm series are very non-standard 3D fighting games, more focused on spectacle than precision. A swooping camera sometimes puts you in the background, basic melee is performed only with a single button, and emphasis is on knowing where your character’s particular safe and weak zones are. These are exceptionally pretty games, too. While not quite as perfect in their cel-shading as later titles such as Guilty Gear Xrd or Transformers: Devastation, they nail the look of the source material, and the animation is unquestionably of higher quality than the infamously corner-cutting anime adaptation. 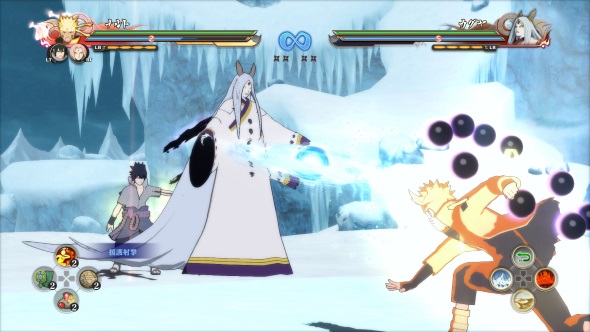 The series doesn’t adhere particularly to any one genre either. Each game in the series has at least some degree of open-world RPG layer with you wandering around looking for sidequests, hunting for secrets and shopping for equipment in-between major story beats. Central story fights are frequently interrupted by (honestly spectacular) quicktime events – if you’ve ever seen or played Asura’s Wrath, you’ll know the kind of thing that Cyberconnect 2 is famous for. The first Ultimate Ninja Storm even has a strong focus on ninja training minigames, such as bounding through forests and climbing impossibly tall trees by running straight up them.

Latter games in the series even include some Dynasty Warriors-esque many-on-one battles, as well as scenarios where you control giant summoned monsters, or fly around shooting stuff in Panzer Dragoon style. The fourth game has one particularly absurd segment where your primary goal is just to travel from point A to B, but you have the optional goal of wiping out over 10,000 enemies on your way there. It’s a shorter fight than you’d think, but highlights the creativity and playfulness of the series as a whole. While the majority of your time is going to be spent in regular fights, there’s a lot to these games, far more so than what you’d expect from the story mode of your average fighting game.

If you’re looking just to play these games for the core combat, you might want to skip straight to the fourth, which has a relatively large and stable player-base on Steam, and a huge roster of playable characters, However, if you like the idea of playing through the complete Naruto story arc in videogame form, covering all the major plot beats both in and out of combat, then you might want to look at grabbing the Legacy bundle, which is quite heavily discounted at the time of writing. It should also go without saying that a gamepad of some description is the ideal way to play.

Bandai-Namco were kind enough to send me a review copy of the Naruto Legacy bundle, and while there’s not room here for a full and comprehensive review of four games plus all their DLC and expansions – all included in this pack – consider this a broad recommendation. Even on sale the bundle isn’t especially cheap, but it contains enough ninja content to be a tempting purchase for anyone who grew up reading the manga, and now feels a little bit old seeing Naruto himself officially married with kids.

The Naruto Shippuden: Ultimate Ninja Storm Legacy bundle (whew) is £38.40 on Steam right now, with the individual games being discounted separately, if you want to pick and choose..