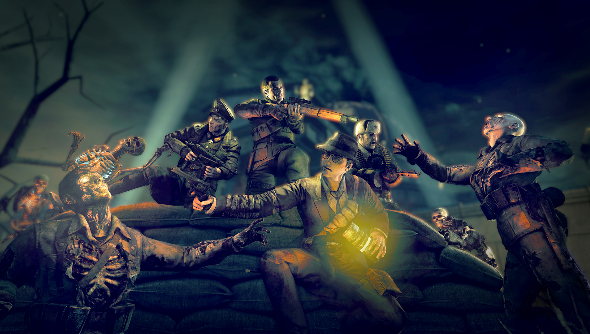 A Nazi zombie is an enemy fine-tuned to circumvent moral ambiguity, second only to the ill-tempered robot or sentient vegetable as a subject for conscience-clear mass murder. Nazi Zombie Army 2 is less Spec Ops: The Line, more Spec Ops: Line ‘Em Up So I Can Slo-Mo Slug ‘Em All At Once.

It launched on Steam today at about 5pm, when British people finish work. Sensible.

Developers Rebellion have come up with a compellingly silly idea – they’ll live stream themselves playing the game from 6pm tonight, and attempt to answer fan questions in between shots.

“The success of the original Nazi Zombie Army was driven by the community of YouTubers and bloggers who were sharing their favourite moments from the game, so we thought we’d thank them by running our own live stream where they can quiz the team about the game’s development,” said CEO Jason Kingsley. “We’ve not really done anything like this before but it should be a lot of fun… or could go horribly wrong!”

That’s the possibility we’re counting on, Jason. D’you think you’ll be playing this?