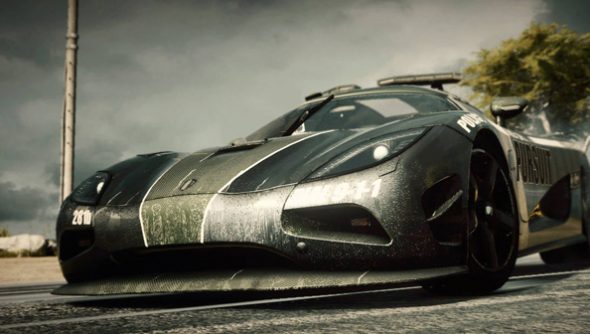 EA have just announced a new Need for Speed game, subtitled Rivals. It’s co-developed by series saviours Criterion. How so co-developed? Well: Rivals is in part the work of Ghost Games, formerly EA Gothenburg – the team brought together in 2011 to adapt DICE’s Frostbite engine for motorcars. The result is an open-world racing game in which you can hop seamlessly between single player, co-op and multiplayer.

Ghost and Criterion have created a place called Redview County, which you’ll tear up as either a street racer or police officer. As in Most Wanted, players will either be building their road-infamy (presumably by ignoring parking tickets doled out on private land or running red lights) or sorting out those who do. Uncharacteristically, it seems the law will be able to join their prey in burying their vehicles beneath custom license plates, paint jobs, decals, rims, and performance upgrades.

What’s more, the two developers have been working on a feature called AllDrive, which will have you jumping into friends’ games “on-the-fly” – a system that sounds a bit like Dead Island’s proximity-based co-op pairing.

“AllDrive is fundamentally a way for us to destroy the line between playing alone and playing with friends. Destroying the line between single-player and multiplayer,” Ghost executive producer Marcus Nilsson told Joystiq. “Imagine you’re playing Rivals, you’re driving your car as a cop chasing someone. You’re going through your progression, collecting points and then I join and we’re friends, so we’ll be put in the same world.”

Apparently, scoring and objectives will change to suit the number of players in the world at any one time.

Rivals is set to release on old, smelly current-gen consoles on November 19, and on next-gen consoles sometime thereafter. No firm date for PC release has been given – though Nilsson said that the game will “look easily as good on PC as next-generation consoles”.

What do you think? New and exciting things seem to be grumbling under the hood of this one.