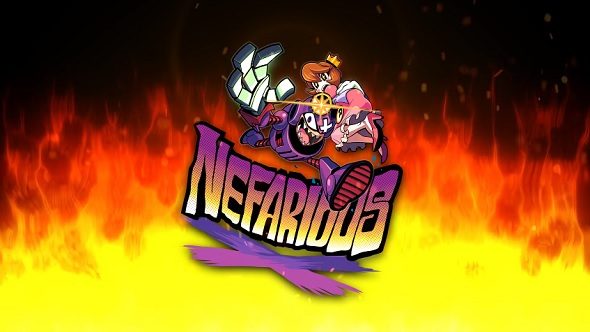 Sometimes, you just want to play the villain. After multiple platformers where you rescue the princess, defeat the bad guy and save the day, it’s time for a game where you actually get to do the evil stuff. In steps Nefarious, an upcoming platformer from StarBlade which tasks players to take the role of a proper pantomime villain, hellbent on ruining everyone’s day.

You play as Crow, a villain whose sole goal is to kidnap all the princesses from the surrounding kingdoms and somehow rule the world. This involves you breaking into several castles, fighting through police and various do gooders and then escaping into the night before anyone catches you. As not all villainous plans go quite the way you want them to, Crow may sometimes be forced to dispatch the hero himself, jumping in a giant mech or vehicle to defeat his nemesis before running away with the princess.

Many of these ‘reverse’ boss battles are nods to classic games, with Crow’s vehicles resembling Doctor Robotnik’s Egg Mobile, Mother Brain from Super Metroid and even Kefka from Final Fantasy VI. It’s certainly something to be fighting from the position of the bad guy, having to deal with the hero’s cheap tactics and persistence as you just try to escape.

With five different kingdoms to invade, several upgrades to collect and an entire world to overthrow, Nefarious should be a platformer’s dream if they are looking for something to play during the first few months of the year. You won’t have to wait long for Nefarious, as it launches January 23.

Do note that Nefarious will be launching on Early Access on January 23, as StarBlade need to add some finishing touches to the game before its complete release in a few months’ time. These include adding a special reward for completing the game with all S-Ranks and making sure the difficulty curve is as smooth as possible. There is also plans for a special local versus mode, where Crow can play volleyball against one of the princesses. No news on pricing at this time but keep checking the Nefarious Steam page as we get closer to the game’s Early Access launch.