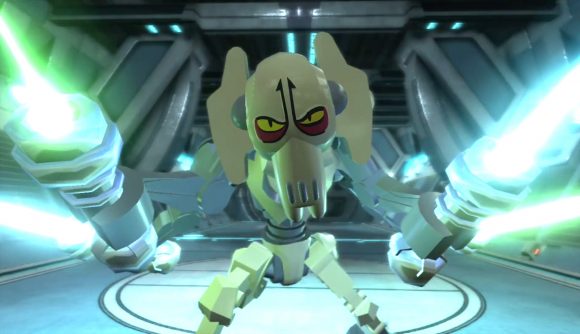 It’s been four years since the last LEGO Star Wars game, an adaptation of The Force Awakens, and it looks like we’ll be getting another one soon – which may be developer TT Games’ most ambitious LEGO game yet.

The new LEGO Star Wars game was accidentally outed at a Star Wars Celebration interview with Matthew Wood, Supervising Sound Editor at Skywalker Sound – but better known as the constantly-coughing voice of droid commander General Grievous from Revenge of the Sith and The Clone Wars. Wood was listing the projects his studio was involved with, including various cartoons and new movie The Rise of Skywalker – but then let slip, “there’s a LEGO Star Wars game we’re working on.”

With no videogame adaptation released for previous movie The Last Jedi, it’s entirely possible – if not completely certain – that a new game would cover the events of both that movie and The Rise of Skywalker, or even adapt the entire sequel trilogy. However, there are also reports it could be even more ambitious than that.

According to Eurogamer, the new LEGO Star Wars title could possibly follow the events of the entire saga, from Episode I-IX. It’s described as the “ultimate” LEGO Star Wars game. That certainly sounds an ambitious project, and would be a neat way to cap off the series.

Matthew Wood randomly said that he is working on new Lego Star Wars game. from r/StarWarsLeaks

TT Games, of course, has a long history with Star Wars, as the studio’s run of LEGO games began with the first LEGO Star Wars game in 2005. Since then there have been four titles released – five if you included the revamped Complete Saga – although it was a surprise when the studio released an adaptation of The Force Awakens but not The Last Jedi.

The most recent LEGO game was based on The LEGO Movie 2, and was an attempt to shake up the formula by introducing open-world hubs – rather than the traditional linear levels, as used in every LEGO game since the original LEGO Star Wars. We’ll have to wait and see if the new game follows the same path.

Thanks to Matthew Wood for being such a poor secret-keeper.