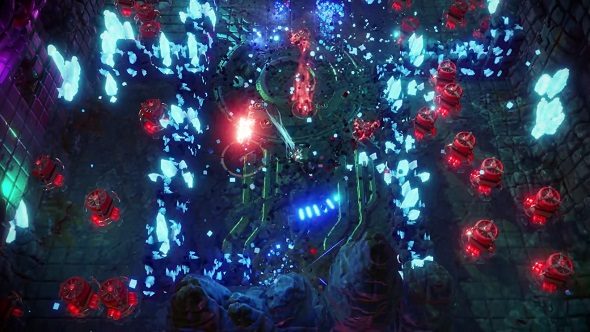 If you’re a fan of swanky particle effects, snappy arcade action, and battling for a place on the leaderboards, I’ve got some good news for you – Nex Machina is coming to PC.

Check out our list of the best indie games for more small studio hits.

You might not have heard of Nex Machina. That’s because it’s from Housemarque, creators of some brilliant arcade games over on PS4, the best of which is Resogun, a hyperactive, side-scrolling shoot ‘em up.

The Finnish developers have a new game: a top-down, old-school, cyberpunk shooter called Nex Machina. Like their other game, Dead Nation, you’ll be using both sticks to move and shoot, but instead of cutting down undead you’ll be putting an end to a machine uprising by shooting them all directly in the face. Robots have faces, alright?

You’ll be firing, slicing and dodge-dashing, all while darting around in time to some funky synthwave. It looks frantic, colourful and explosive.

It’s coming to PC, and you’ll be able to play it in 4K, so it’ll be like peering into a kaleidoscope after falling into a vat of mind-altering substances. Have a watch of the trailer above for a free sample. It’s coming this year.