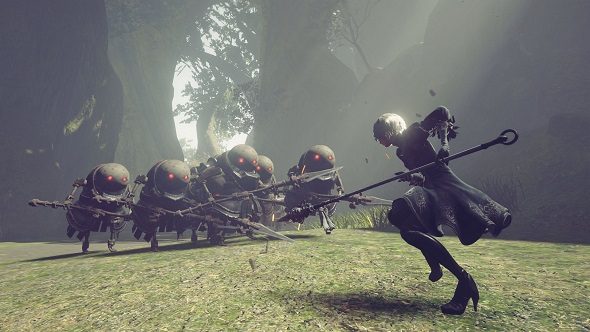 Nier: Automata’s had a bit of a rough time of it on PC. Thanks to frame rate, resolution and full-screen issues, many players have skipped out on this top-class action RPG due to its myriad of technical issues.

The PC port of Nier: Automata leaves a lot to be desired.

What’s worse, AMD card users have not been able to play Nier: Automata at all, due to an infamous white screen bug. Luckily, AMD have finally got themselves in gear and have released a driver update which should get rid of the irritating white screen.

Posted on the AMD subreddit, company representative AMD-DOWNL1NK stated that the reason for the delay on this fix was because “discovering, resolving, and verifying the root cause” of this white screen glitch turned out to be a very lengthy process. While this driver update should hopefully make Nier: Automata playable, DOWNL1NK implores users to comment on the AMD subreddit with any other problems they may be experiencing.

For other users, Nier: Automata has only been playable through the use of the Fix Automata Resolution mod, which actually makes the game display at 1080p. However, this mod was not without its own controversies, as it would only work for those who legitimately acquired their copy of Nier: Automata.

If you had pirated the game, the mod would check to see if your copy was a cracked version and then keep you locked in an infinite licence screen for your illicit behaviour. Needless to say, pirates got quite angry at this and eventually made their own fix, which doesn’t include the looping licence screen and moral judgement.

The driver update is available now, so AMD users just need to download it to hopefully see an improvement.