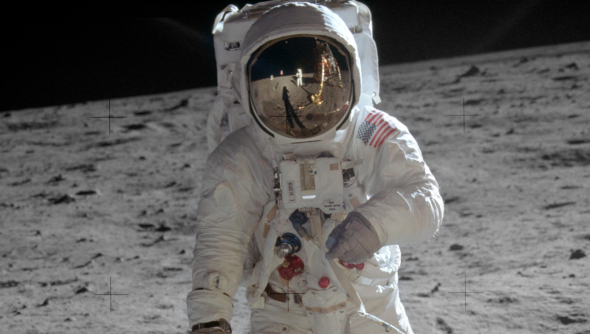 Publisher Slitherine, known for their strategy titles, signed a deal this summer for a game themed around space exploration. The project is in development with Polar Motion and Slitherine say they expect it to see release some time in 2013, 44 years after humans first set foot on the moon.

In a statement, Slitherine’s chairman J.D. McNeil said he was “privileged and honored to have the opportunity of working with Buzz,” which you would be. “He is an extraordinary individual and a true hero of modern history. The game will sit perfectly in our catalogue, we work in a particular niche of the videogames market and this title will fit very well.”

Aldrin’s own statement contained a tantalising detail about the content of the game. “Not only will it focus on the space missions I was privileged to take part in,” he says, “but it will also include my Aldrin Cycler concept which incorporates my vision of how we should get to Mars.” Interesting.

Colonel Buzz Aldrin was the second person to walk on the moon as part of 1969’s historic Apollo 11 mission and this isn’t his first involvement with video games. 1993’s Race Into Space, published by Interplay, had players taking control of the space program of either the US or the USSR and trying to beat the other nation to the moon.