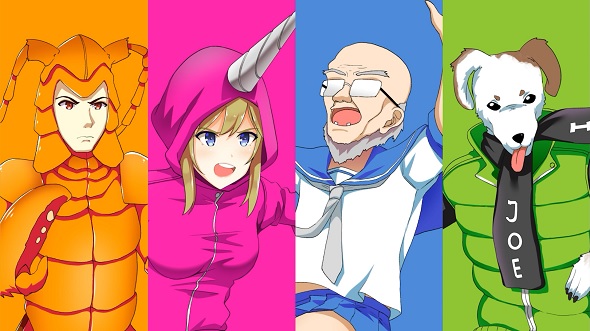 Familiar with Japanese game shows? They’re often absurd, sometimes dangerous, and always an absolute laugh. Why not bring some of that energy to videogames, then? Well, that’s exactly what Nippon Marathon does. We are giving away free copies of it to some lucky winners – enter below!

Want a free game you can play right now? Who doesn’t?! Check out the best free PC games.

Nippon Marathon is basically a videogame version of Takeshi’s Castle. If you have never watched that show then, firstly, you are missing out and, secondly, let’s get you up to speed. The idea is for four contestants to run across a ridiculous obstacle course with the winner being whoever crosses the finish line first.

Simple enough, right? But, ah, you can expect to hurdle barrels, outrun Shiba Inu, dive out of the way of bicycles, and chuck fruit at your opponents. There’s much more, too: run through panes of glass, slap people in the face with a fish, dodge earthquakes, and run into fake doors.

As all the collisions are managed by a physics-based system Nippon Marathon can be called a ragdoll racing game. It’s a party game (with drop-in/drop-out play) so it is meant to be played locally (i.e. everyone on the same machine) – the idea being that you all laugh and shout at each other’s misfortune and victories.

There are a number of tracks you can race across in the Early Access version, not to mention a few different contestants, including: a lobster man, a girl obsessed with onesies, an old man in a schoolgirl outfit, and a dog-headed man. More tracks and contestants will be added in the future with the full game expected to release in autumn or winter 2018.

If you want to win one of the 10 Steam keys we have for Nippon Marathon then you need to enter the competition via the widget below.Every action you complete is worth one entry into the giveaway, and the more actions you complete the more chance you’ll have of winning. We’ll also need your email address so we can send you a code upon winning – we won’t send you spam, we promise. Please read our terms and conditions before you enter.