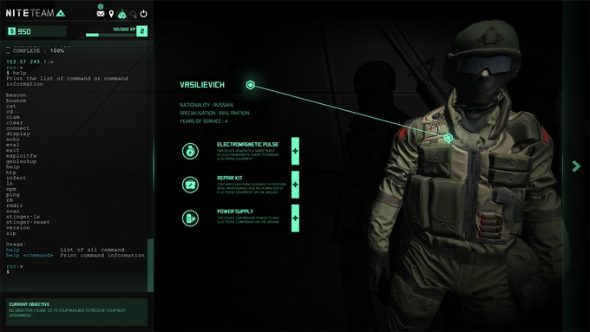 In a world where hacking groups are a powerful tool in clandestine political warfare, we sure don’t exploit that rich fictional seam much in games. NITE Team 4, a currently funded Kickstarter title, looks to breach into that world and create an RPG out of what lies within.

For more great indie games on PC, check these out.

Alice & Smith, a Canadian game studio versed in blending the real world with game elements in their ARG The Black Watchmen, will continue the themes of intelligence analysis and RPG-like progression with a militarised hacking simulator.

Network Intelligence & Technical Evaluation (NITE) Team 4 will feature all the immersive tradecraft terminology you’ll find in any of the NSA leaks of the past decade while also using a simple command-line interface to make you feel like you’re that guy in the balaclava in all those stock photos of hackers.

Controlling elements of a game through coding is becoming an interesting little niche after the success of sci-fi titles like Duskers, where you control a small team of robots scavenging through abandoned spaceships.

The Kickstarter is already past its modest $30,000 CAD goal but there’s 21 days left to throw in your bucks for any of the game’s pledge rewards, including your own tailored ARG experience for 24 hours complete with hacking and actors and everything (if you’ve got 7,500 canadian casholas to drop on it).