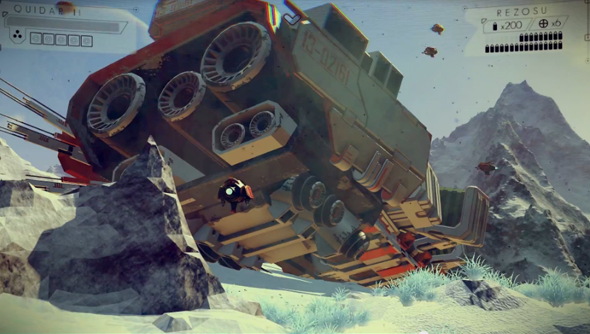 Hello Games don’t want to be typecast, that’s for sure. Their last game, Joe Danger, saw you controlling the eponymous stuntman as he navigated a sidescrolling racetrack. Their current game, No Man’s Sky, places you with other players in a procedurally generated universe and leaves you to explore the vast space, filled with wildly different worlds, and populated with creatures great and small, all of which have their place on their planets.

It’s difficult to grasp the scope of No Man’s Sky. It’s simply too large. However, the trailer does a good job of showing how rich a game it is.

“We’re an indie studio, we want to do loads of different things,” Sean Murray told Geoff Keighley at VGX. “And, I guess, with this game we wanted to make something that was a science fiction game and there are lots of science fiction games but they’re normally… when I say that you picture space marines, you picture the post apocalypse, you picture dystopia, and that’s not what I picture when I think of sci-fi.

“We wanted to make a game about exploration. So in our game when you stand on a planet and you see a mountain, if that mountain is three miles away, or wherever it is, you can see it you can walk there. You can go and you can explore it. But if you see a planet on the horizon, that’s a real place, you can see features on it and you can hop in your ship and you can go there. But it’s even more than that: if it’s night time or you’re in space and you see all the stars, those are real stars, those are suns, and they have planets around them. You can go and visit them.”

You don’t do this alone. You’re “all playing in the same universe and there’s persistence there.” Murray doesn’t expand on this to say how you can affect a world in a way that other players can see. Though, if that shot in the trailer of the ship blasting a hole through an asteroid is anything to go by then it could be that you can alter the geography of a planet for everyone in the known universe.

Murray made clear that No Man’s Sky isn’t “just wandering about passively. These are planets that have an ecology, they have an ecosystem, and you’re not necessarily at the top of that chain.” Hopefully, there’s more to do on these planets than fight things. It would seem a waste for such a beautiful concept.

The trailer shows a little of the variety of life present on the different planets. The undersea life, birds, the Frank Herbert-esque sand worm, all of it has the sense of being just the first page of an extensive bestiary.

What I’m particularly keen to learn is just how procedurally generated this game is. The trailer opens by saying “every atom procedural” and games like Spore have shown it’s perfectly possible to generate models, textures, animations, and AI completely procedurally. The extension of that technology to populate a universe doesn’t sound impossible but then there were shots of ships crashed into a planet’s surface. Instances like that are usually something hand-placed by a designer.

I look forward to hearing more about No Man’s Sky. It looks to have the potential to unseat Elite Dangerous, Star Citizen, and Limit Theory from their places in the eagerly anticipated space simulation throne room.

Here’s the rest of that interview: