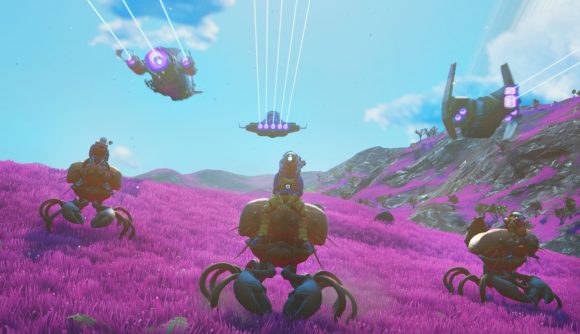 No Man’s Sky is best known for offering the opportunity to head out and explore the stars in its enormous universe. But with its upcoming update, Beyond, Hello Games’ space-faring opus seems like it’s about to let players put down routes planetside instead.

In a presentation ahead of the new update’s release, studio co-founder Sean Murray explained some of the new features on offer, and it sounds as though those of you who don’t want to explore the galaxy will find plenty more to do, from small-scale agriculture to building up towering industrial heartlands.

Beyond will let you farm the creatures you discover on the planets you explore, milking them to provide resources, and riding them around when you need to get somewhere in a pinch, and a cooking and recipe system so you can enjoy the fruits of your labour. On top of that, however, Murray says that base-building has been expanded significantly, with “a logic and power system,” which will help provide electricity “so people can build way more creative bases.”

But a bigger base isn’t all that Beyond has to offer. Murray says that “there’s industrial base-building, kind of like Satisfactory or Factorio, where you can build much more complex bases with industrial parts that will extract minerals from the ground.”