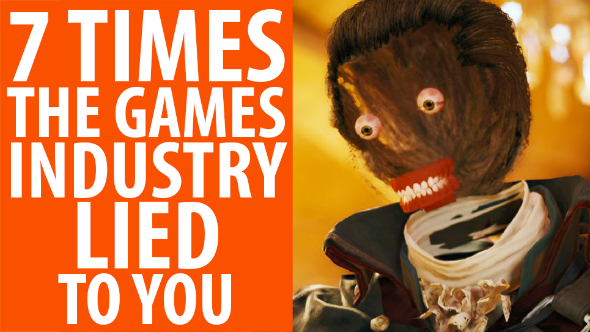 Today at PCGamesN we’re talking lies, which aside from rhyming with pork pies, also make the noses of those who spout them grow in length. Or so we’re told, only last time we looked Sean Murray, Yves Guillemot and Peter Molyneux all had perfectly regular sized noses, so they probably didn’t fib nearly enough. To be fair to them, they probably didn’t mean to, but when you’ve got millions of excited gamers poring over every word you say it’s probably wise to keep your lips sealed. So in celebration of said foul-ups, we’re counting down the most noteworthy lies told to us by the games industry.

Looking for something a bit more positive? Our list of the best PC games is about at positive as it gets.

So who’s in the firing line apart from Mister Prime Suspect over at Hello Games? How about the people responsible for the Game of the Year edition of Dead Island, a game that came out during the same year as Dark Souls, Portal 2, Batman: Arkham City and Skyrim? Then there’s the whole Fable 2 acorn debacle, the supposed Xbox One exclusivity of Dead Rising 3 and what about Ubisoft saying they weren’t going to release a buggy Assassin’s Creed before going on to release two in the same month? Hope that serves as a nice blood-boiling appetiser for you all.