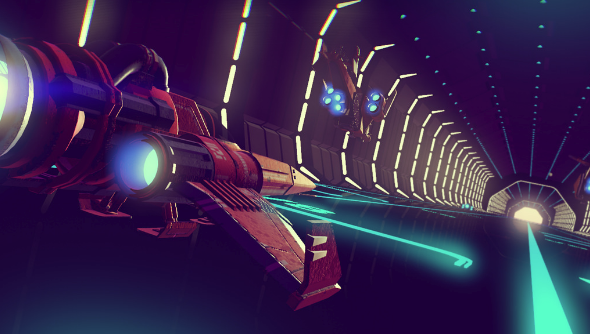 It seems like people are still a bit confused about what happens in No Man’s Sky, so Hello Games have put together a big list of what the game is all about for the Playstation Blog. The 41-point list elaborates on features we already know about, and puts a cohesive picture together of the whole experience.

No Man’s Sky is not a random universe, but a procedural one that is generated by a strict set of mathematical rules. So whilst everything will be new and unique, it will abide to laws that keep things understandable. This procedural nature means that the universe will be 18,446,744,073,709,551,616 planets dense, which would take 585 billion years to explore if you were to visit each one for just a second.

Planets are split into barren, cold, and rich types. Those close to the sun are hot and barren, and those far away are cold and icy. In the middle are the rich planets filled with life and vegetation, which will be the most exciting to explore. The barren and cold planets will still be worth touching down on though, as they will still contain resources.

With no cutscenes, the aim of No Man’s Sky is simply to have your own adventure, much like in survival games. Similar to Elite, this can be achieved through trading, combat, or pure exploration. Setting your own goals is the aim of the game, but the big ‘goal’ is to reach the centre of the universe.

On your way you will discover new planets, most of which not even the developer will have seen. In fact, Hello Games have bots searching the universe and sending back data, so they have a good idea of what’s out there. But because of the size of the universe, it’s likley many – even most – of the planets you land on will be brand new to any player. If you’re the first there, you’ll log its details in the game’s Atlas, which will be an ever evolving encyclopedia of the game’s universe.

But remember: No Man’s Sky is not an MMO. You could bump into people along the way, but considering the size of the universe, it’s possible you will never once see another living person. The game is designed to be played solo.

Mechanically things sound a lot like Elite, with an upgradable ship that can travel limitless distances, but must be fuelled to allow hyperspace jumps. Ships can be purchased should you need a different model, such as a bigger cargo hold if you’re a trader, or better weapons if you’re a fighter. When out in the universe you have a wanted level, which will attract police or the military the higher it becomes. Being a good citizen will allow you to make allegiances with the various different factions.

If No Man’s Sky interests you, it’s worth reading the full listof points. The game has no release date yet, but is now confirmed for a PC release as well as PS4.