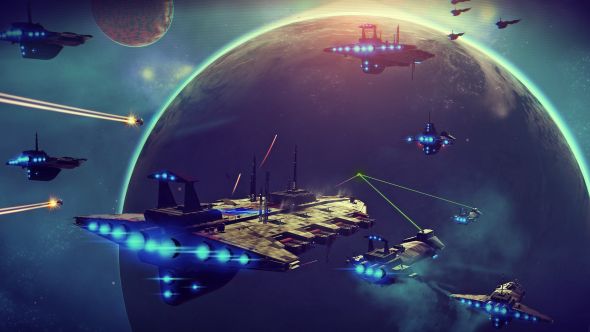 The Advertising Standards Authority, a UK-based marketing regulator, has ruled that the promotional material No Man’s Sky’s Steam page did not mislead consumers over the game’s content.

For something similar, try one of the best space games on PC.

The fact that No Man’s Sky’s environments are procedurally generated was a big part of developers Hello Games’ defence, as it enabled them to argue that the player experience varies between playthroughs.

“The summary description of the game made clear that it was procedurally generated, that the game universe was essentially infinite, and that the core premise was exploration,” the ASA say. “As such, we considered consumers would understand the images and videos to be representative of the type of content they would encounter during gameplay, but would not generally expect to see those specific creatures, landscapes, battles and structures.”

The ASA published a lengthy note on their ruling, which you can read in fullhere. The ASA say that Hello Games gave them a copy of the game, links to third-party footage uploaded by players, and their own recorded PC footage to make their ruling.

The ASA looked for “the game features queried by complainants” in these assets, and concluded that “the overall impression of the ad was consistent with gameplay and the footage provided… and that it did not exaggerate the expected player experience of the game.”

One example of the complainants’ queries was space battles. A trailer – which you can still view on No Man’s Sky’s Steam page– clearly depicts a large-scale space battle in which groups of fighters and larger ships ‘warp in’ to a system, then fire upon one another and upon the player.

Here, the ASA say Hello Games “noted that some elements were rarer than others; for instance, the larger the scale of a space battle, the more unusual it was, which they believed was to be expected because it made for a more rewarding experience.”

That’s the pattern for most of the features the ASA assesses. It’s worth pointing out that their investigation was confined specifically to the impression of the game given in the Steam (and PlayStation Store) ads, rather than in wider marketing, such as Sean Murray’s many interviews.

It now remains to be seen whether this ruling will cool the widespread rancour over No Man’s Sky’s marketing – we rather suspect not, given that Hello Games are being let off the hook.