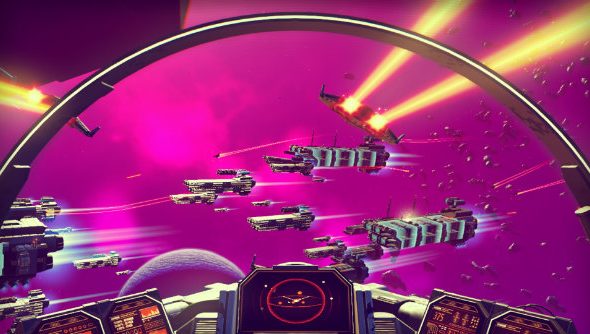 The team at Hello Games haven’t had the best run of luck. The Guildford-based studio was flooded on Xmas Eve, 2013 – all their PCs, laptops, furniture and development kits were destroyed, and a bunch of work was lost. Now they’re facing a delay on the verge of launch, which has lead to immature idiots on the internet who don’t deserve videogames sending them death threats.

You know, instead of sending death threats to people who have been working hard for years to make something nice for you, you could always play the titles in our list of the best space games.

At the time of the flooding, Hello Games said they wouldn’t let the misfortune cause a delay, but that was two years ago, and plans change.

If their infinitely explorable universe needs more time, just give them more time. Maybe play a different game, interact with some real people, hibernate, or have a really long cry – do anything, but don’t tell a stranger you will kill them because videogames.

Hello Games founder Sean Murray did the best thing he could in this situation, diffusing it in the classiest way possible.

Tell me when its safe to remove the marbles and oil from the stairs. It's getting really cumbersome, and I need the toilet

While he’s making light of it on Twitter, imagine having to explain to your family why random internet people keep saying they’re going to murder you.

When Kotaku broke the news of the delay before the official announcement, games writerJason Schreler got the same treatment from a bunch of rabid fans.

Just wait until they get their hands on the game and they all find out that only women are allowed in the sky. Ooh boy.