On Tuesday, I loaded up No Man’s Sky for the first time in nearly two years, and I was incredibly confused. If, like me, you’re coming back to the game after a long hiatus, lured in by the promise of multiplayer, then prepare for a steep learning curve.

No Man’s Sky NEXT is basically a new game, full stop. Practically everything has changed, with even simple refuelling now requiring a more complex crafting process. I envy anyone lured in by the update to play No Man’s Sky for the first time – this is the game it should have been at launch, packed with missions, storylines, building opportunities and trading goods, all covered in layers of graphical flourish and topped off with that coveted multiplayer mode.

As someone who bought the game at launch, I can’t help but feel a little bit cheesed off that almost all of my progress has been undone – even the planets I so carefully named have been written over with procedurally generated monikers.

My save indicated that I last played the game in November 2016, and a hell of a lot has changed since then. For a start, most of my stuff has gone. My multi-tool and exosuit were littered with icons saying ‘obsolete technology’, with the only option to dismantle them into ‘technology modules’ (which can be sold for a whopping 50,000 units). It seems the entire tech tree has completely changed, and even the raw materials are unfamiliar – plutonium is gone, for example, replaced by di-hydrogen crystals. And all those blueprints I scoured the universe for have disappeared. To replace all my sweet, life-sustaining upgrades, I needed to track down more blueprints with updated formulas for crafting new gear. 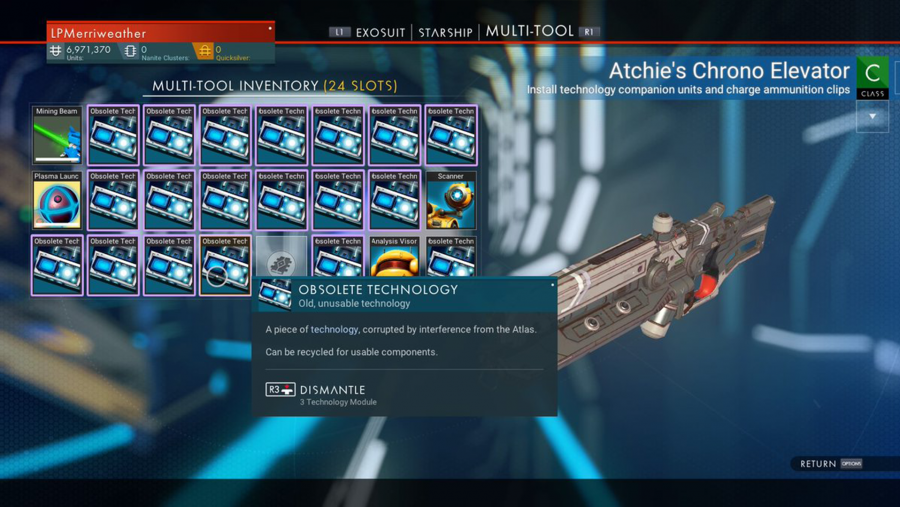 The upshot of this is that I was about as vulnerable as a newborn lamb in the vacuum of space. After 50 hours of play in the weeks after the game launched in 2016, I’d built myself a pretty lethal mining tool and an exosuit that could withstand whatever hazards a planet could throw at me. Now I could probably die from going out in the rain. My original plan when loading up the game was to build a base, then perhaps head off to look for some nearby players to mingle with. But instead I spent my time just trying to stay alive. Over the next two hours I wandered about like a bewildered old man returning to his now-unfamiliar childhood town. But instead of remarking “There’s a Starbucks where the library used to be”, I was muttering “What’s chromatic metal and how do I get some? And what the hell are nanites?”

Shoot for the stars

The overhauled universe of No Man's Sky is wonderful for how it will change the way we play, but it also fits perfectly with the photography tools added in a previous update. The universe has never looked so good, so get out there into the universe to capture it.

It does all look rather pretty though. The graphical overhaul is comprehensive, and planets are littered with lovely touches like scudding clouds and dramatic planetary rings. In fact, I spawned in a space station right next to a phenomenal-looking ringed planet. The space stations have also changed dramatically – rather than a single, tiny room carrying one lonely occupant, the stations are now teeming with sentient species, and there are half a dozen merchants selling all sorts of upgrades. There’s also a nifty appearance personalisation suite so you can adjust how your avatar looks in the new third-person mode. I opted to become a Korvax in a spangly green suit, but you can also be a Vy’Keen, Gek or Traveller – or just a plain old boring human. 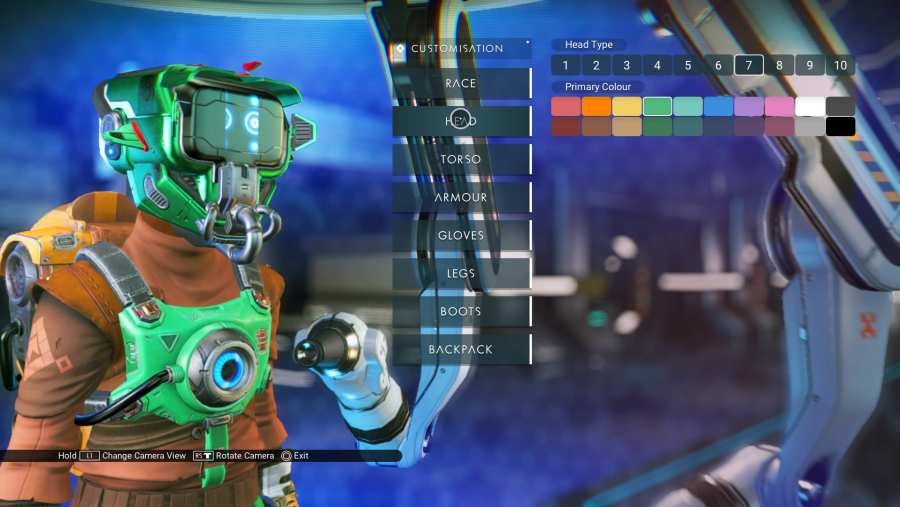 It was at one of the shops that I discovered the Merchants Guild offering a selection of quests, with those mysterious nanites as a reward. And then I found that the Technology Merchant could sell me precious blueprints for said nanites. I selected a couple of quests, hopped into my spaceship and set off to a nearby planet for my first mission. Unfortunately, this quest was to repair some broken machinery, and I didn’t have the required materials. More to the point, I didn’t know how get them – and some, like chromatic metal, apparently need to be refined. How on Earth do you go about refining stuff? Does it have to happen at my base?

And speaking of bases, I had no idea how you go about building one. I scoured the new in-game guide for information, but came up short. In fact, I had no idea what I should be doing. I spent a while scanning flora and fauna, which now gives you nanites each time, I played around with the new terrain manipulator, I got into a dogfight with pirates and appreciated the dramatically improved starship controls (the third-person view is especially useful here). But after an evening’s play, I was still confused about the radically changed game systems.

The reddit forums revealed that I’m not the only one having problems. Veteran players have reported that they’ve essentially been put back to square one, stripped of their base and multiple starships, being left with just one barebones ship and their freighter. It seems it’s possible to retrieve your base later on, but everyone is in the same boat of having their upgrades made obsolete.

I was still feeling annoyed that the upgrades I spent dozens of hours acquiring have been stripped from me. And like many of the reddit commenters, I began contemplating simply starting over with a new save – at least then the tutorials could guide me through all the unfamiliar new game systems. 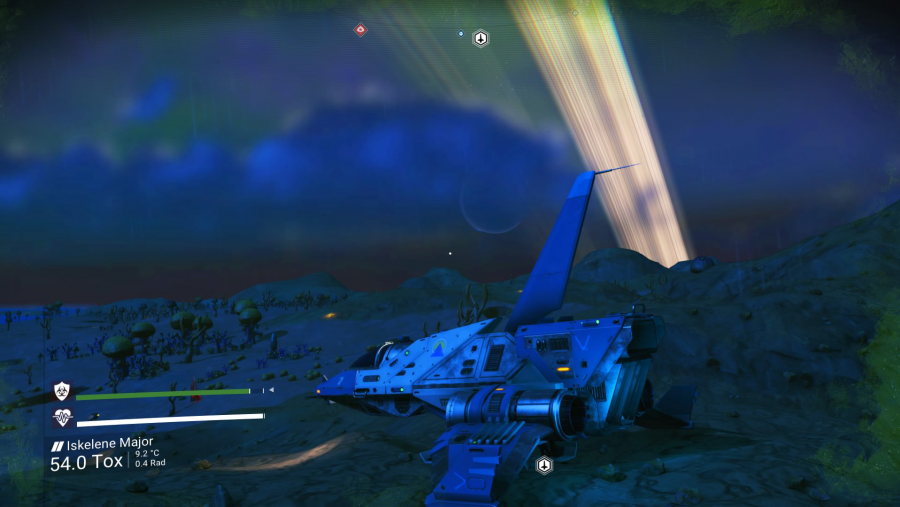 I went to bed feeling frustrated. But the next day I resolved to go back in and give the multiplayer a go – and the experience was transformative.

My friend Stephen is a similarly lapsed No Man’s Sky player, drawn back into the fold by the promises of the NEXT update. He joined my game with no problems, and suddenly there we both were in a space station, chatting about how weird it was to see another player in this most lonely of games. We experimented with the new gesture system, admired each other’s ships, and commiserated about the loss of our obsolete technology. Then we took a joy ride down to a planet.

Exploring in No Man’s Sky with someone else in tow is a very different experience, making even mundane tasks exciting. Naturally, we started off by taking a commemorative photo of us stood in front of Stephen’s ship before setting off to explore the planet. 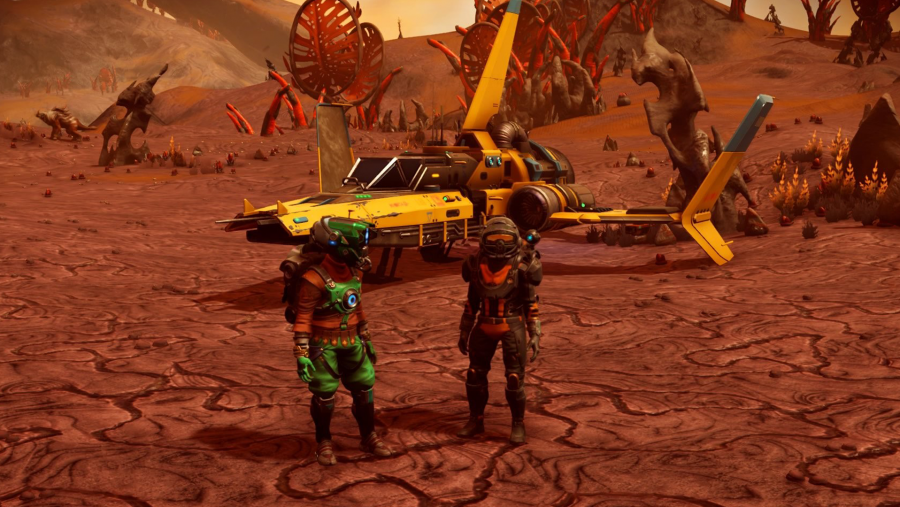 There were near misses when we wandered too far from the ships and our hazard protection suits ran out of juice. We found and mined a copper seam, I finally worked out how to build an ore refiner, and Stephen proudly pointed at the new machine as it churned out that precious chromatic metal.  We left the planet in search of somewhere more interesting and flew straight into a cloud of space pirates, and forcing us into a frantic battle – Stephen saved the day by swooping in and taking out the last pirate as it was about to fire on my shield-depleted ship.

We were doing the sorts of things that have been the core of No Man’s Sky since launch, but, with company, it was fresh and lively. After an hour or two more, Stephen declared it to be the best multiplayer experience he’d ever had. “It’s just so relaxing,” he said, totally unlike most other multiplayer games, which tend to focus on competition. 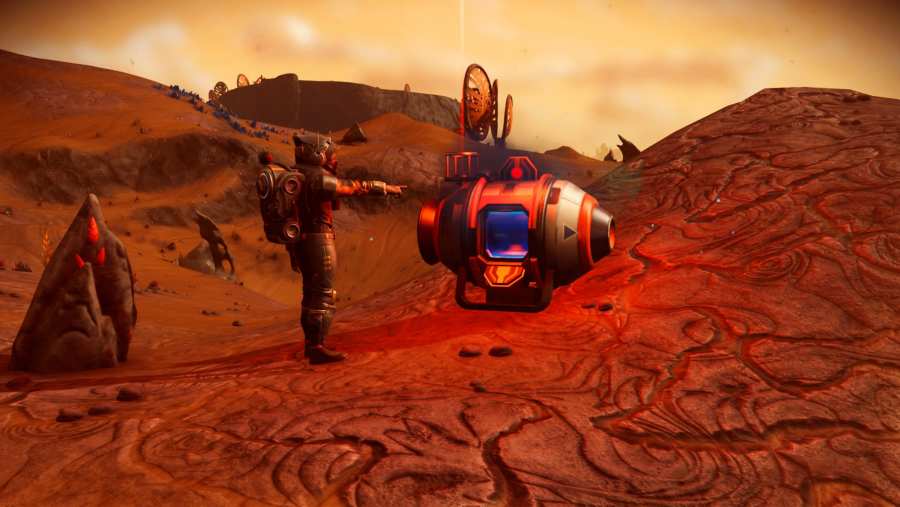 Still, it’s not without its flaws – we experienced a number of bugs, like ore disappearing and reappearing, weird sound glitches in hyperspace, Stephen’s cockpit randomly opening during interplanetary flight (a problem that’s been reported by a number of users) and an especially weird bug when we both got zapped to a new location and flipped around when trying to leave a planet’s atmosphere. And for some reason, a planet that I’d uploaded a new name for the previous day still showed up as undiscovered in Stephen’s game. But none of these problems really detracted from the grand old time we were having.

No Man’s Sky has always been about simply pottering around space, deciding on your own objectives and exploring for the sake of exploring. But pottering with a friend is exponentially more fun. If you’re a veteran player who’s returning to try out the NEXT update, be prepared for some confusion and frustration, which can be considerably lessened by journeying with a friend. But if you’re experiencing the game for the first time, I’m exceedingly jealous.