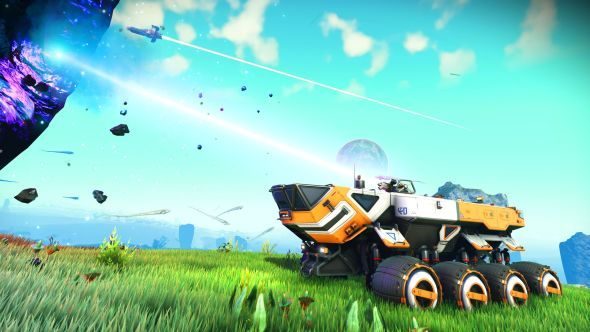 Another major update is coming to No Man’s Sky. Hello Games have recently announced the development of No Man’s Sky Next, a free update that will be available later this year.

Here are some of the best space games on PC.

Next will be the fourth major update to the game, after its Foundation, Pathfinder, and Atlas Rises updates which have launched over the past 18 months. The game had a commercially successful launch, but that success was marred by what some players felt was a lack of content.

Sean Murray, the founder of Hello Games, says “we are calling this No Man’s Sky Next because it is an important step in a journey for No Man’s Sky,” but a press release issued this morning offers little in terms of what the new update will include. Murray tweeted to say that the update would be the game’s biggest yet.

Coming in Summer 2018 is No Man's Sky NEXT, a free update for PS4, PC, Xbox and WeGame. It's our largest update so far, and we're working our socks off pic.twitter.com/wZhjaLMbsT