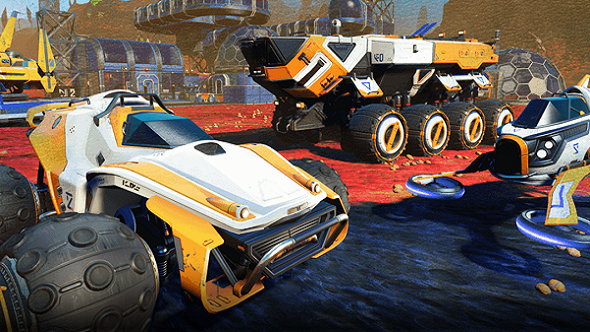 Update March 13, 2017: No Man’s Sky is getting yet another patch soon, with this one addressing a couple of things introduced in the latest update, which added all new land vehicles and more.

At the moment, you can only build land vehicles on your home planet. This new patch will allow you take construct them wherever you wish, building one to assist you in your mining efforts on a distant moon, for example.

Go for more interstellar adventures in these PC space games.

In addition, there’s a new HUD marker being introduced so you can more easily find vehicle bays. Some wheels should never be more than a few rocket boosts away, assuming you’re not stuck in a cave somewhere.

Update March 8, 2017:The Path Finder update has landed for No Man’s Sky, adding a host of gameplay and visual improvements to the space sim.

There are now three land vehicles, races, high resolution textures, more components for base building, Steam Workshop support, more traders, and a bunch of other quality of life improvements.

The three vehicles you can craft and whizz around in are: the Nomad, a light hovercraft that can zip across water; the Roamer, a speedy four-wheeled buggy; and theColossus, a lumbering truck that’s great for mining resources.

The vehicles can be upgraded, and you can plot out race courses to challenge other players to a time trial run.

In other player interaction, you can save your base to the Steam Workshop, letting other players visit and rate your creations. There are now more components to build with too, so you should be able to make something special. You can even leave a race course out the back if you want, and you can place messages around for players to read.

Elsewhere, you can now own multiple ships, you can kit your weapon loadouts for specific tasks, and you can even equip some new weapons types that were added in the update. If you think these weapons and vehicles will give you enough of an edge, you could even jump into the new permadeath mode, though that sounds like hell. Have a watch of the flashy new trailer above.

You can look at some examples of those visual enhancements at the official announcement, along with full patch notes.

Original Story March 7, 2017: Following a period of radio silence from the studio, Hello Games have revealed that a new update for No Man’s Sky will be coming later this week. Titled thePath Finder update, Hello Games hope to build on the improvements from last December’s Foundation update.

The main addition of this update is a “vehicle that will aid home planet exploration”, which should prevent players from having to jetpack all the way across a world or wasting spaceship fuel just to get to a new area. The Path Finder update also hopes to “to hint at a path ahead for the future,” probably suggesting a new ending for intrepid space explorers.

Following extensive community feedback from the release of the Foundation Update, Hello Games are hoping to rectify even more player issues with the release of the Path Finder patch. I doubt we’ll be seeing multiplayer any time soon, but this new vehicle should make planetary exploration that bit more exciting.

The vehicle will most likely be a four wheeled buggy, based off files datamined following the release of the Foundation Update back in December. Redditor eegandj was actually able to import the early Buggy model into No Man’s Sky a few months ago, so expect this vehicle to be making its grand debut later this week.

Hopefully, the success of this patch may open Hello Games up to more open communication between fans of No Man’s Sky. Expect full patch notes and more details on the Path Finder update later this week.