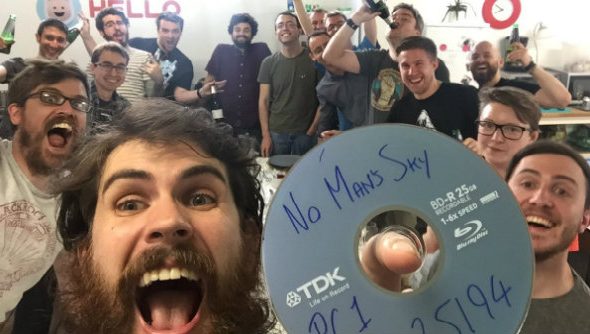 Some people are extremely angry about what’s waiting at the center of No Man’s Sky’s galaxy. If you don’t want to know what that is, stop reading now.

For more floating through the infinite black, here’s our list of the best space games.

There are multiple posts across the web talking about the big payoff at the end of No Man’s Sky, and many are feeling let down by what’s waiting at your final destination.

Just what is there? Well, more No Man’s Sky. The screen fades and you’re plonked right back on the edge of the galaxy to do it all again. Yay.

To be fair to the developers Hello Games, they did always say that getting to the galactic core wasn’t the entire purpose of the game. “We originally had that in mind for No Man’s Sky and when press were on it we said ‘well you could try to reach the centre of the universe’, but we personally never saw that as the point of the game,” said game director Sean Murray in an interview with Game Reactor.

“What we did set out to do, for just one moment you play the game, you land on a planet and you feel embedded there, that this is a real place. It’s something you’ve discovered for yourself and you have a moment of wonder, and for me that is unique to games that we can do that and I think totally justifies the game. The game doesn’t need to do anything else than that and I would be happy.”

However, the game does push you towards reaching the center of the galaxy via waypoints on the galactic map. You have to turn these off manually if you want to explore freely.

Whatever the team put at the galaxy center, it could never live up to people’s expectations. I’m just happy that I called it back in July.