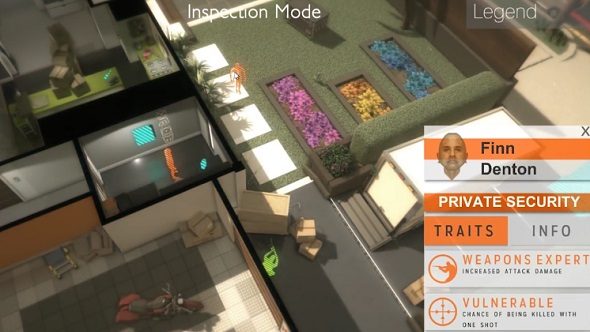 Keep it quiet with these top PC stealth games.

Developed by Square Mountain, No Trace sees players taking the role of a covert agent who has splintered off from their clandestine organisation. As a rogue entity, it’s now your job to fulfill specific contracts without being detected by your targets or ex-employers.

The environmental design of No Trace is very much like Hitman, with each area having its own unique layout and ways of taking out your targets. The office building has you coming in through the parking garage, sneaking past guards, and taking out CCTV camera on the way to your target. The Brazilian favela has you moving between different elevation, surprising your targets from either above or below. You’ll have to vary up your approach based on each new locale, with clever agents being rewarded for carefully using their environment.

The Splinter Cell influence comes via No Trace’s precision targeting, as well as its slow-mo ‘mark and execute ability’. The former mechanic is straight out of Splinter Cell Conviction, while No Trace’s precision targeting system hasn’t been used within a twin-stick shooter before. You can aim at specific body parts, meaning you can aim directly at an enemy’s hand to make their drop their weapon, or at their legs to stop them moving. If you have a clear line of sight, this precision aiming is great for quickly sending a group of bad guys to sleep with a tranquiliser pistol.

Planning out your next move is key in No Trace, with the game’s Inspection Mode allowing players to scan a room before they burst in. When in Inspection Mode, time is temporarily frozen as agents check for points of interest, special NPCs and ways to escape should everything go south. Rather like Hitman’s Elusive Targets, each mission contains a handful of randomly-generated NPCs, complete with their own unique traits. These NPCs appear on each new assignment, so no two missions will ever play out in the same way.

Initially planned to release at the end of last year, developer Square Mountain do not have a new release date for No Trace. You can sign up for its beta over on the No Trace website, so put your name down if the gameplay trailer has peaked your fancy.