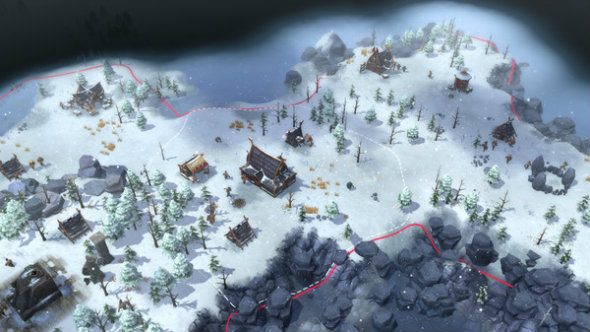 The last time we covered forthcoming real-time strategy release Northgard, everyone’s favourite writer Kirk decided to make a lot of tortuous Game of Thrones jokes, given the similarity in setting and theme. That’s unfortunate, because it now means I can’t.

Screw your head on straight and check out the best strategy games on PC here.

Either way, the French developer behind Northgard, Shiro Games, has pushed out a new trailer for the title, put together to showcase its wares at Gamescom earlier this month.

While the game’s reveal trailer focusing on setting the scene – detailing the game’s roots in North mythology and its tale of the Vikings’ quest to a mysterious new land, unsurprisingly dubbed Northgard – the Gamescom video is a far more practical affair, showing off more of the gameplay itself.

In short that means there’s no HBO style voiceover. Instead we get a video laced with a soundtrack so catchy it’s likely to stay in your head all night.

Actually, jokes aside, Northgard looks like it’s shaping up to be a slick bit of strategy, which would make sense, given it’s from the studio behind the Evoland series – the second game of which was rather well received.

According to our friends over at WCCFTech, the developer has claimed there are three tribes built into play to start with, with more to come later on. Interestingly, there are multiple ways in which you can ‘win’ – military victories and economic victories both on offer. More mysteriously, if you discover and rebuild the Sword of Odin, you can pick up a ‘wonder victory’ as well.

The trailer footage is taken from Northgard’s alpha build with a run on Early Access expected soon, and a full release either at the end of 2016 or start of 2017. What’s more, if you replay the trailer three times on YouTube, a new ending is unlocked where Sean Bean dies. Perhaps. Maybe. Possibly.