In the last console generation, both PC hardware giants had a hand in either Sony or Microsoft’s boxes – it was ATI’s hardware that powered the 360, and Nvidia’s ‘reality synthesiser’ behind the curtain of the PS3. But a funny thing’s happened this time around – Nvidia are out of the race, back to supporting the PC exclusively.

And it shows. Today, Nvidia SVP of content and technology Tony Tamasi told the throng at their E3 event that the GPU manufacturer is “giving people a better than console experience”.

“The PC is the most powerful gaming platform out there,” said Tamasi, before clicking over to a slide worthy of fistpumps: 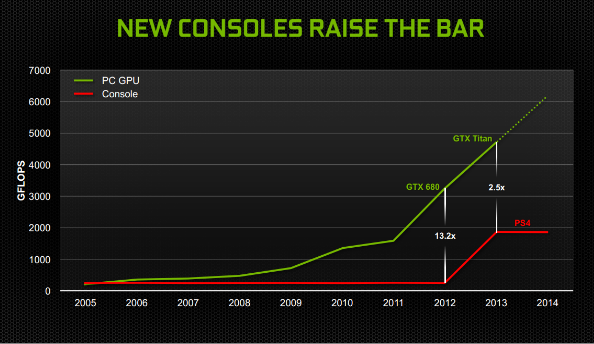 He went on to describe the situation of the past eight years as one where, despite constantly improving PC graphics technology, the state of games has more or less stayed the same because developers are having to build games that will run on old hardware. With the introduction of the PS4 and Xbox One, games will see a sudden increase in graphical power as developers suddenly have access to a bottom-line hardware spec that is significantly more powerful than before. “Developers can now build really awesome content that can then scale to the PC,” said Tamasi.

The slideshow demonstrated a 2.5x performance difference between the PS4’s graphical horsepower and that of Nvidia’s GTX Titan. It’s true that the Titan is a beast in both price and output, but regardless of your budget, if you have a decent gaming PC rig, we’re about to see a sudden jump in quality when next-gen consoles arrive, and the PC will still hold advantage.

“It’s becoming more and more obvious that PC gaming is the best gaming experience right now and that won’t change even with next generation consoles launching” claimed one of Tamasi’s slides, and demonstrations from a variety of huge titles backed this up. DX11, Tessellation, TXAA, FXAA and plenty more acroym-tastic words were thrown out as examples of technologies that Nvidia were pushing in bold new directions. 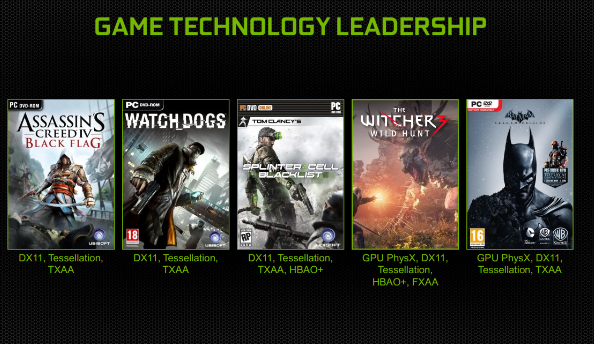 There’s been much talk about the cloud since Microsoft made it sound like a system angels created for the benefit of Xbox users everywhere, but Nvidia have their answer prepped. Tamasi explained how the company are working on GRID, a service that will render games in the cloud and then beam it down to the device of your choosing. Microsoft doesn’t have a trick that the PC can’t do better it seems. Well, perhaps we do 24-hour check-ins better.

With the power of Nvidia’s PC chipsets now undoubtedly shown, Tomasi concluded with a slide that would bring a smile to even the most haggard, jaded PC user: ‘PC – MOST IMPORTANT GAMING PLATFORM’. With a revenue projected to be $20billion by 2015 (twice that of the PlayStation market), and 48% of developers working on PC titles, the platform of the master race is one that is impossible to ignore. 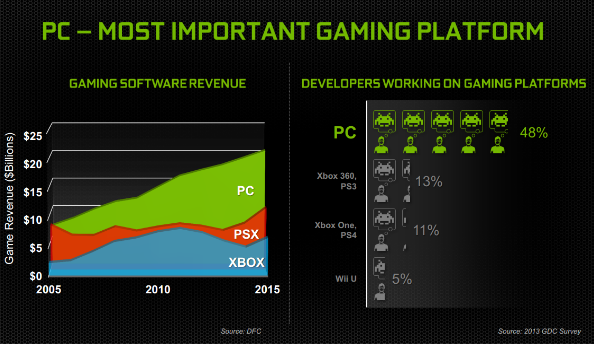 Realistically speaking a fair percentage of that 48% will be working on games like Oil Rig Simulator or some kind of casual title you couldn’t give a crap about. But for every five of those, we have a studio like CD Projekt RED that harnesses the real potential of the platform and takes us to new worlds in ways we’ve not experienced before. Nvidia’s work in advancing the graphical technology behind these games is no small part of why we love our platform so much, and with the company now dedicating almost all their resources on building towards an ever-brighter future for the PC, you can be safe in the knowledge that you will always be sitting in front of the best place for games.

In an E3 that’s been dominated by corporate battling, loss of consumer rights and the other usual console-specific fare, it’s great to see Nvidia come out and sing the song of the PC congregation nice and loud.