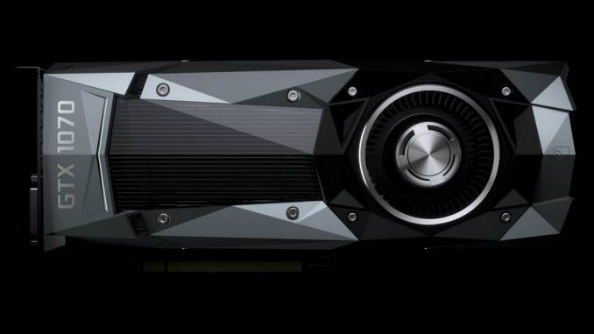 The GTX 1070 launches today at 2PM BST/9AM ET. It’s hotly anticipated, well-recieved by benchmarkers and reviewers so far, and although it’s considerably more expensive than the GTX 970 it replaces, it does outperform a Titan X after all. You’ll be able to buy it from all the usual retailers (although you wouldn’t know it by looking at their store fronts right now, oddly), but here’s the real question: should you?

One instance in which it certainly makes sense to take the plunge is building a machine to power the PC’s best VR games.

The GTX 1080 launch worked the same way, and we’re two weeks from its launch now with a decent range of OEM cards available at a slightly lower price point. So the first thing to consider before buying a card is this: if you want a GTX 1070 right away, you’re paying a big premium to do so.

If you wait a few weeks, OEM cards will become available. So the next bit to meditate on is what the differences between Founders Edition (FE) cards and OEM versions from Asus, Zotac, EVGA, MSI, Gigabyte et al really are.

What differentiates the Founders Edition from the rest? Nvidia’s reference cooler. It’s a very similar design (visually identical from the exterior) to the GTX 1080’s, featuring that angular ‘remixed’ aesthetic that riffs on previous 980 and 970 reference designs. It also pushes your heat out of your case through an external exhaust, rather than simply away from the GPU and into the case.

OEM cards are free to attach their own cooler designs to the 1070 PCB, and it’s worth noting here that previous generations of both Nvidia and AMD cards have consistently seen improved cooling performances from third-party coolers over reference designs. It’s extremely likely that your OEM card will be able to handle temps better than the Founders Edition.

OEMs can also add another power connector to the PCB. The reference card has a single 8-pin connector and a total TDP of 150W. Other manufacturers can raise that ceiling for more overclocking potential, and thus increase performance with their own designs. If you’re concerned about getting the max potential grunt out of that GP104 silicon, that’s something to consider.

It’s a bizarre situation, because the pricing of FE and OEM cards is at least partially inverted when plotted against performance. The increased pricing of the FE relates to its earlier availability, but its performance will likely be surpassed by the first wave of OEM cards priced around £70 cheaper.

Of course, that’s the low end of the OEM range. Higher end overclocked cards, watercooled models and the like will almost certainly exceed that £399 FE price.

To finally answer the question, then: should you buy a GTX 1070? It’s up to you, I’m not your parent. Do what you like. But I’m waiting for an OEM, personally.