The SHIELD’s games library just keeps on growing; here are the latest remastered classics to add to your collection.

Available now from $199, NVIDIA’s SHIELD Android TV is the ultimate set-top box that’s also a rock-solid games system. It can stream games in HD direct from NVIDIA’s GRID service, even from your own PC via GameStream, and it can access the full range of Android games on Google Play. But if you want something a bit special, NVIDIA is also releasing an enormous collection of new and classic titles with extra SHIELD polish; here’s what available to buy today. 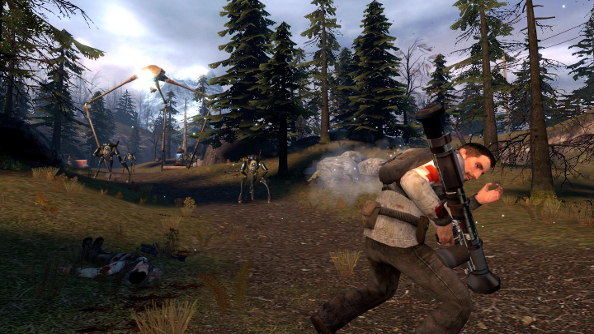 The final instalment in the Half-Life series so far won’t feature much in the way of surprises if you’re familiar with the rest of the games – the only bit of new weaponry is a form of ammunition for the Gravity Gun that comes into play during the game’s epic set-piece finale – but it’s still a compelling chapter in the Gordon Freeman saga. Taking the action out of the urban wasteland and into more rural, open settings, it’s a perfect mix of pitched battles and tricky puzzles that more than lives up to the Half-Life name. 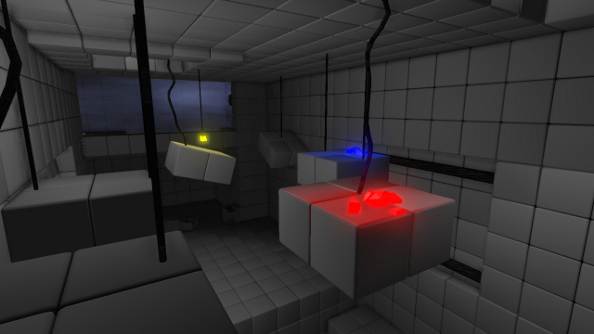 If you’re a fan of twisted first-person puzzle games such as Portal and Antichamber, Q.U.B.E: Director’s Cut will be a worthy addition to your SHIELD collection. At its heart it’s a series of ever more fiendish puzzles in which you have to move blocks around, complete physics-based challenges and even get in a bit of platform-jumping, in order to save the Earth from an approaching alien construction. But is your mission really as it seems? 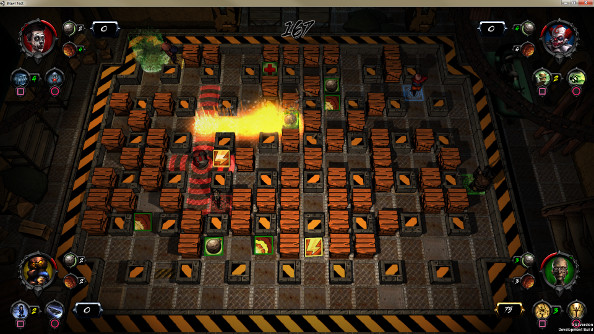 The setting – a dark and sinister world called The Emporium – may be a little unsettling, and its eight character classes might put you in mind of an RPG, but if you’ve ever crowded around the TV with some friends for a game of Bomberman then Brawl’s old-school arcade action is going to be immediately familiar to you. There’s plenty of bomb-dropping in the game’s top-down maze levels, but the assorted characters – including a blind girl with a knife-wielding teddy bear, plus of course a scary clown – also have their own special moves to add to the explosive action. 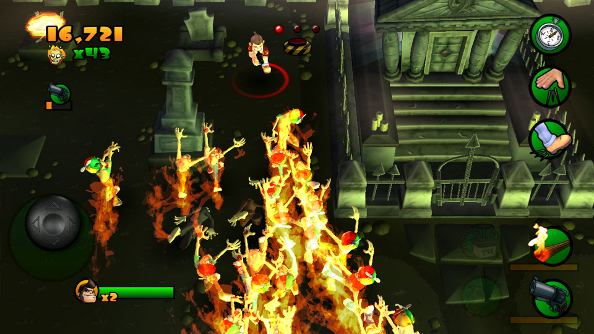 What’s cooking? In Burn Zombie Burn it’s a horde of char-grilled zombies. As lantern-jawed hero Bruce, you need to protect the lovely Daisy from the approaching zombie army, blasting them and chopping them up with a helpful array of tasty weaponry. Which is fun in itself, but things really kick off when you do as the game’s title suggests and start setting them on fire. Burning zombies drop better pickups and act as score multipliers, but they’re also faster and more dangerous, leading to some deliciously frantic arcade action. Groovy. 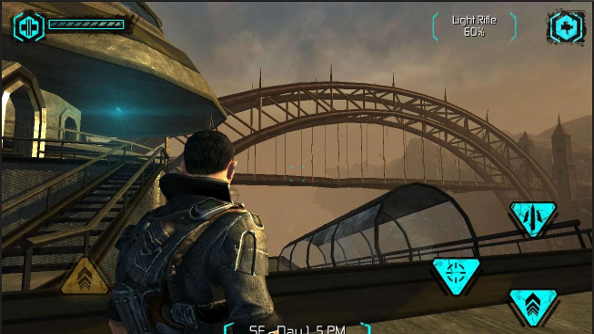 On a distant planted in the near future, a corrupt government attempts to enslave a colony with a lethal virus. As an Elite Enforcer, it’s up to you to uncover the plot and overthrow the oppressors in Exiles, a 3D sci-fi RPG from Crescent Moon Games, the creators of Ravensword: Shadowlands. It’s a compelling tale of conspiracy and government plots – not to mention loads of weapons and plenty of aliens and mechs to fight – set in a massive open world with a full day/night system. Pick one of three character classes, tool up and set off to smash the system. 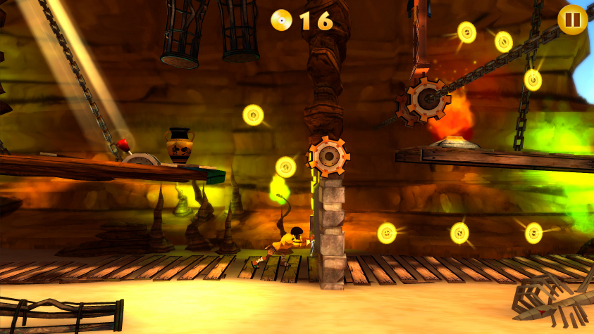 One thing that classics scholars never seem to mention is that the Greek god Zeus was a big fan of funk music who sent his son Perseus out to destroy the evils of Pop, Rock and Rap. Thankfully this lost myth is finally addressed in Funk of Titans, and it’s every bit as bonkers as you might expect: fast and frantic platforming in which Perseus – strong in the arm and thick in the head – runs, leaps and fights his way through the ancient world, battling Titans in climactic boss battles and bringing back the funk. 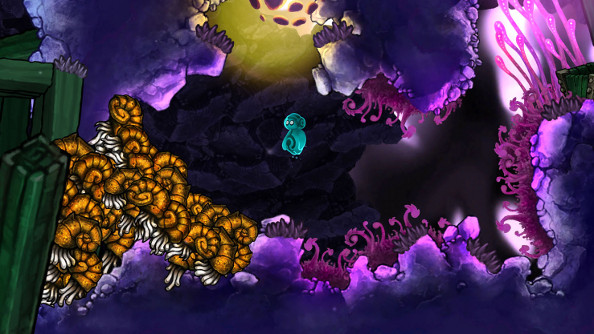 Beatbuddy isn’t the easiest game to explain, but we’ll have a go: it’s an underwater adventure in which the music plays an important role in the action. As you explore its six hand-drawn worlds, you’ll notice parts of the environment creating bits of the soundtrack, as well as undersea creatures dancing to the beat, and as you control Beat – trying to rescue his sister, Melody, from the evil Prince Maestro – you’ll find that you can avoid obstacles and enemies by following the beat of the music and timing your moves appropriately. 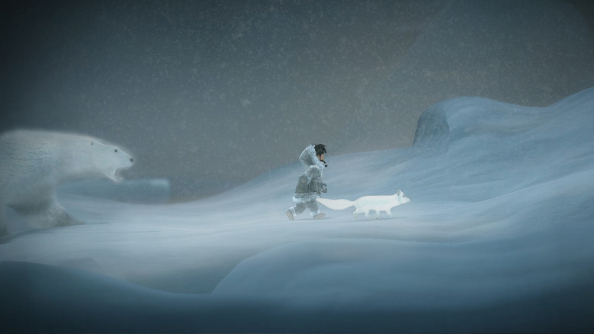 Developed by Upper One Games and E-Line Media, Never Alone is a novel puzzle-based platformer that challenges the notion that video games are solely for entertainment. Featuring breathtaking visuals, art direction and storytelling based on Alaskan Native folklore, the game explores the theme of working together to overcome adversity. That core theme runs through everything you see in the game, including the two playable characters, a young Iñupiaq girl named Nuna and her fox companion, who each have their own skills and abilities. 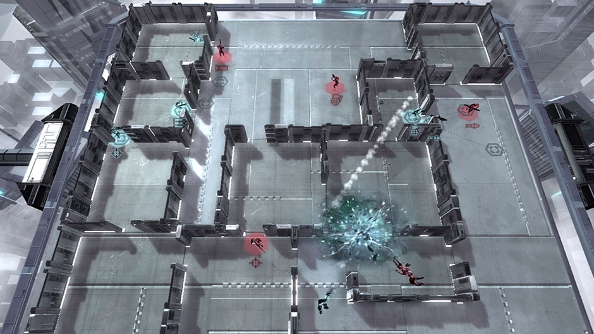 For a more tactical portion of SHIELD gaming, look no further than Frozen Synapse Prime; it’s a polished turn-based strategy game in which you control a small squad of rebel soldiers – shotgunners, machine-gunners, snipers and grenadiers – in a bid to liberate the futuristic city of Markov Geist. As rebel leader Tactics, you issue orders to your combatants – plotting their routes, telling them what to attack and controlling their behaviour – through an impressively detailed command interface, and you can even test out your plans before putting them into action. With over 40 procedurally-generated levels, it’ll test the skills of even the most battle-hardened strategist.