Unless you’re a fantasy-hating grump, there’s a good chance you love The Lord of the Rings. J.R.R. Tolkien’s legendary novels, and Peter Jackson’s celebrated cinematic take on the epic adventure are breathtaking works of fiction, and Middle-earth: Shadow of War is wise to take much of its visual inspiration from the Oscar-winning films.

That’s not to say the epic open-world adventure doesn’t have some innovative ideas of its own. Shadow of War expands on the established Lord of the Rings lore in some seriously awesome ways, whether it’s changing an elephant-sized spider into a charismatic sorceress, or making hated villains surprisingly sympathetic. Below you’ll find five of the best ways Shadow of War tweaks the original Tolkien lore.

Before that, though, to celebrate the release of Middle-earth: Shadow of War on October 10, Nvidia have teamed up with Warner Bros. Interactive for a very special bundle. From now until October 16, when you buy select GeForce GTX 1080 Ti and GeForce GTX 1080 graphics cards, systems, and laptops at participating retailers you will get your choice of UWP with Xbox Play Anywhere support or a Steam copy of Middle-earth: Shadow of War.

Thanks to a variety of high-end PC features and refinements, including an Ultra High Definition texture pack, support for 4K resolutions, and Nvidia’s innovative Ansel screenshot-grabbing tech, there’s really no better way to experience the PC edition of Shadow of War than on GeForce GTX GPU-powered hardware. 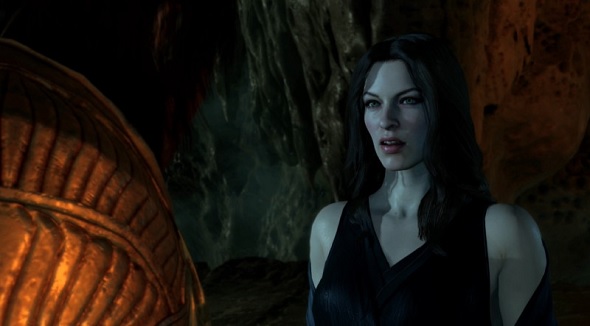 Shelob is a seductive sorceress, not a massive creepy-crawly

Contrary to what Return of the King told you, Shelob isn’t actually a great spider. Alright, technically she is, but in Shadow of War she’s presented as an agile arachnid who can also take the form of a decidedly human-shaped woman. Peter Jackson may have chosen to present the orc-eating goliath as a gigantic spider, but in Talion’s adventure, she’s actually a dependable ally. Don’t get us wrong, she’s still a self-centered manipulator, but her magic visions at least help the ranger in his quest to stop Sauron.

It’s a good thing Shelob rarely chooses to appear as her true spider self, because on the likes of a GeForce GTX 1080 and GTX 1080 TI graphics cards – both of which can comfortably run Shadow of War in spellbinding 4K – that’s an awful lot of disgustingly hi-res arachnid for your poor eyes to take in.

Being spiritually and physically bound to a master, undead elf craftsmanship sure has its uses. Before he was mercilessly cut down by Sauron, Celebrimbor was tricked by the Dark Lord into forging the nine Rings of Power. Now, thanks to the events of Shadow of War, the wraith finally has a chance to exact revenge on Mordor’s ultimate bad guy. Early in the adventure, Talion and Celebrimbor work together to create a new ring; one forged from good that’s equally as powerful as The One Ring. Unlike Sauron’s piece of enchanted jewellery, Talion’s ring wasn’t designed to subjugate its wearer. Instead, Celebrimbor’s creation holds the power to stop the forces of evil and save Middle-earth.

Like the previous game, Middle-earth: Shadow of War is packed full of memorable moments that are truly stunning to behold. And now with the new game you can actually hold onto those in-game moments forever and even share them with your friends online with Nvidia Ansel. Built into the latest version of GeForce Experience, Ansel allows you to easily capture your exploits and favorite scenes in Shadow of War with the press of a button – and in stunning high-definition. 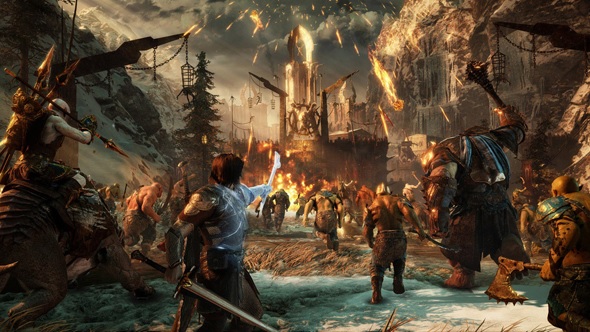 Orcs are not always the bad guys

Tolkien’s classic books and Peter Jackson’s majestic movie trilogy had it wrong: orcs really aren’t that bad if you give them half a chance. Shadow of War paints their various tribes in a far more nuanced light than the films, and as Talion recruits more and more orcs and Uruk-hai to his army, you get to meet some seriously interesting characters.

Take Bruz the Chopper. This towering Olog is a ferocious battle commander, and once Talion enlists him to the cause – courtesy of the ranger’s mind-altering Domination power – Bruz becomes an invaluable ally. Not only is the burly brute an undefeated champion of Mordor’s fighting pits, the massive Aussie Orc also has a surprisingly jovial demeanour. When he’s not helping you storm the gates during one of Shadow of War’s epic Nemesis Fortress siege battles – which look sensational played in 4K resolution – Bruz often jokes about the various death threats he receives. Apparently, being threatened by dozens of rival orcs is “just good for a giggle.”

It makes the Nazgûl sympathetic

In storytelling terms, this really is quite the accomplishment. If you watch these ghostly assassins in the movies, you probably think the hooded spectres are a bunch of creepy, despicable jerks. And you’d be right.

All credit to Shadow of War’s writers, though, because not only do they fill in the gaps on how these former kings of men came to be slavish servants to Sauron, the game actually manages to make the Nazgûl sympathetic. Without delving into specific plot spoilers, just know these ring-worshipping fiends weren’t always single-minded hunters. In many ways, they’ve been just as wronged by the Dark Lord as Talion and Celebrimbor. 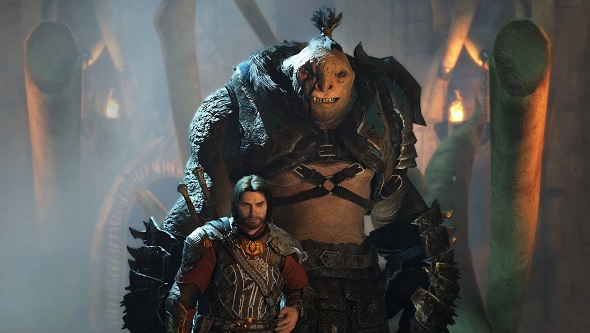 The game’s trolls can totally get a tan

Unlike the dim-witted wimps who get outsmarted by Bilbo – briefly spotted as a trio of sad statues in Fellowship of the Ring – the trolls in Shadow of War don’t fear the sun. Whereas their cousins in the books and films turn to stone at the merest hint of a UV ray hitting their skin, the game’s battle-hardened Olog-hai are perfectly content to scrap with Talion in broad daylight. That’s a good thing, too, because fighting these beasts on the sun-kissed plains of Gondor shows off Shadow of War’s sumptuous HDR mode – the contrast between light and shadow looking especially glorious when playing the game at high settings.

You can thank Sauron’s twisted magic for granting these hulking baddies their own form of paranormal sun tan lotion. They may be able to suck up rays on a hot day, but luckily for Talion, the hybrid trolls can’t match the ranger or his wraith pal’s quickness and cunning in a fight. Still, at least they can work on their tan before Talion cuts them down to size.

Middle-earth: Shadow of War launches worldwide starting October 10. Get the game on day one on PC by purchasing the new GeForce GTX 10-series bundle.