Developers of virtual reality games are truly beginning to hit their stride. None more so than Survios Studios whose first-person shooter Raw Data has been built from the ground up for VR and is available now to HTC Vive owners via Early Access on Steam.

Raw Data exploits the unique active VR capabilities of the HTC Vive to bring cooperative first-person shooting to the platform. Taking on the role of an elite hacker working for the SyndiK8 resistance movement you are tasked with infiltrating the seemingly benevolent Eden Corporation in order to steal one geopbyte of confidential data and expose the company’s corrupt activities.

Once inside Eden Corp you find yourself facing waves of battle androids programmed to annihilate any interlopers. You need to gain access to the corporation’s arsenal of cutting-edge weapons in order to survive and complete your mission.

Raw Data is a whole body experience immersing VR players in the action to a startling degree. Combatants find themselves in a roughly circular arena with android assailants attacking from all sides. Head and body tracking provides the impression of physical presence while the HTC Vive’s controllers enable players to fight hand-to-hand, with lightsaber-style swords, guns, projectile weapons and explosives.

Unlike a traditional first-person shooter that requires simply a single press of a button to reload or switch weapons, in Raw Data you use the HTC Vive’s controllers as a tactile, physical input. You can pull weapons off your body by mimicking a real-world gesture, throw firearms from one hand to another, wield dual weapons, and so on. Similarly, when under attack you can use physical movement to deflect attacks, duck and dodge your way out of danger.

Most exciting is Raw Data’s multiplayer offering. Two HTC Vive-wielding resistance operatives can team up to take on the metallic marauders of the Eden Corporation’s defense systems. While one of you offers ballistic cover the other can be gathering information. 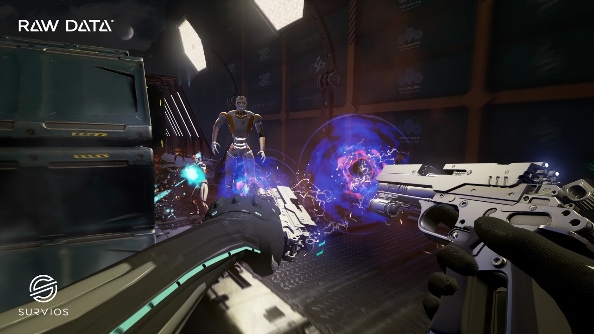 Survios has worked with NVIDIA to bring VRWorks Multi-Res Shading to the Raw Data experience increasing framerates by up to 30%. With this increase in performance comes improvements in particle effects, textures and lighting. Realism and immersion join physical interaction and the ability to feel your way through the experience. The result is a VR game, built from the ground up by passionate designers and tech partners, that drives this exciting new gaming medium forward.

Raw Data is available on Steam Early Access right now. For the best possible experience make sure your PC rig is equipped with a NVIDIA GeForce GTX 970 GPU to meet the minimum specs while a GTX 1070 (or above) is recommended for the optimal VR experience.