If you have an NVIDIA GeForce GTX graphics card in your PC, then you’re probably already aware of an amazingly useful app that comes with it. GeForce Experience is the easiest way to get the best out of your NVIDIA GPU, enabling you to keep your drivers up to date, optimize your games and share your finest gaming moments. But if you haven’t looked at it in a while then you might not have realized that there’s a brand new version in town: GeForce Experience 3.0.

GeForce Experience 3.0 boasts an enhanced interface and new features, and it’s three times faster as well as consuming half the memory of the previous version, which should be reason enough to grab the update straight away.

However, if you used ShadowPlay in the previous version to livestream your games and upload footage to your favorite online video service, you might be a little taken aback when you can’t find it in GeForce Experience 3.0. What happened to it?

Don’t panic! ShadowPlay’s functionality is still there in GeForce Experience 3.0’s new Share Overlay, which makes it even easier to stream your action live and record your best gaming moments.

Accessing the Share Overlay couldn’t be easier: simply hit Alt+Z in-game to bring it up and you’ll be one click away from all the options you need. You can choose to automatically record the last 20 minutes of play with the Instant Replay option – previously known as Shadowmode – or just opt for manual recording as and when you need it by hitting the Record button. GeForce Experience 3.0 can record gameplay at 60fps at up to 4K resolution in both fullscreen and windowed modes, so you won’t miss a thing.

The Share Overlay also makes it easy to broadcast to Twitch or YouTube Live at up to 1080p 60fps. Simply click the Broadcast button and select your preferred service and away you go. Not only is it simple to get up and running, it also means avoiding taking a performance hit. NVIDIA has tweaked and optimized the experience to reduce the system resources required. 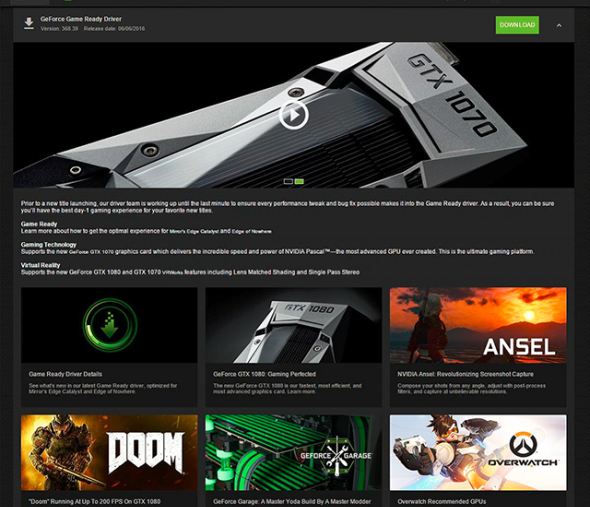 GeForce Experience 3.0 also has you covered with its in-game screenshots feature. Just hit Alt+F1 to save a screenshot to your gallery, and you can use the Share Overlay to take care of uploading screenshots too. It can upload shots to Google Photos or Imgur at up to 3840×2160, with the added bonus that GeForce Experience users get an increased file size limit over uploading on the web. With 12MB per shot at your disposal there’s no need to compromise on quality.

Perhaps the coolest thing about the new Share Overlay, though, is its new Stream feature. Rather than just broadcast your game online, using Stream you can connect with friends and share the fun. It’s an experimental feature that, once activated, lets you send an invitation to a friend to install a Chrome app, through which they’ll be able to see what you’re seeing.You can then share controls, take turns at beating levels or, with compatible games, hook up for some co-op action.

And now as a way of giving back to its community, gamers can win great prizes including copies of new PC games simply by logging into the new GeForce Experience. Just in October alone NVIDIA has given out over $300K in game codes for Dead by Daylight. Shadow Warrior 2 and Obduction!

It’s a whole new way to enjoy games on PC, and it’s only available through GeForce Experience 3.0. If you haven’t clicked the little icon in your system tray for a while, give it a press to update and see what you’ve been missing out on.