GeForce NOW, NVIDIA’s cloud-based game streaming service for its SHIELD family of devices—including SHIELD Android TV and SHIELD Tablet K1—just keeps getting better and better. As well as full titles that you can purchase through the service, there is an ever-growing library of games that are automatically available to you with a membership ($7.99/month and free for three months to try out). The latest addition to the service is Operation Flashpoint: Dragon Rising, a serious, gritty combat simulation that aims to recreate the experience of combat in the real world.

The game is set in 2011 and takes place on the island of Skira. Formerly a territory controlled by the Russian Federation, it has been seized by Chinese forces and the two factions are locked in a military standoff. Russia seeks the aid of the US in attempting to drive back the Chinese forces and this is where your story begins.

There are two playable characters in the main campaign mode. 2nd Lieutenant Mulholland is the head of a four-man team comprising himself, a SAW gunner, a medic and an engineer. The second character, Sergeant Hunter also has a similar setup but with his engineer also being an anti-tank specialist. 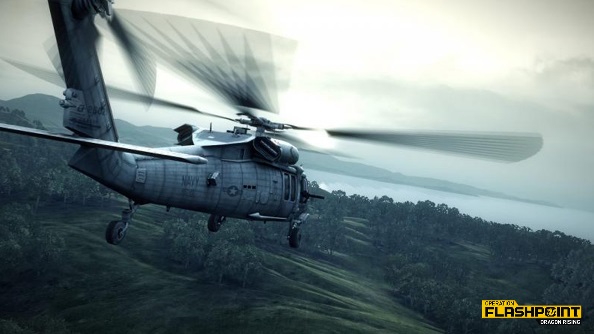 Over the course of the game they are called upon to launch daring rescue missions, drive enemy forces from occupied villages and provide support to other beleaguered divisions. Because this is a simulation, things are a bit more complex. There are several difficulty levels and when you play on the lowest setting, you have a HUD that informs you of weapons, ammo, health, directions and the location of enemy units. If you go up to the highest difficulty level, you enter full sim territory and there is zero visual information on-screen. As in a real-world combat situation you have to be aware of the equipment you are carrying, keep in mind ammo levels and get intel on enemies by communicating with your squad members. It’s tough, and it’s terrifying, but it does provide an extremely authentic war experience.

This authenticity is present in every aspect if the game. Your weaponry for example (and there are over 70 weapons, from pistols and machine guns right up to large explosive devices) is based on real-world hardware and the game’s ballistics system simulates precisely how they handle and their destructive effects on building, vehicles and people. In addition there is no rapid reloading here. Each weapon is reloaded the way it would on the battlefield so you have to be aware of this when you’re planning your next advance into enemy territory. You also have access to a large number of land, sea and air vehicles, many of which you can operate but others that can be remotely called for like air support or strategic strikes.

It’s a gripping experience but also a fascinating insight into real, modern day warfare and the environments here are brought beautifully and grittily to life thanks to the HD streaming technology via GeForce NOW.