Running a chainsaw lengthways through a demon in Doom. Stepping out of the dungeon into the light in Oblivion. Making it to Frankfurt on time with a trailer full of wheat just as the dawn breaks in Euro Truck Simulator 2. PC gaming has a long history of must-see moments of visual spectacle, the kind of perfect marriage between gameplay and looks that people would talk about at the water cooler if they dared. And Middle-earth: Shadow of War’s sieges are the next entry in that long list.

As Talion travels between the regions of the world map overthrowing orc warlords and recapturing their fortresses, Monolith’s sequel to surprise 2014 smash Shadow of Mordor presents battles of a scale we’re more used to from an RTS than a third-person action game. An entire army under your command meets an opposing force, filling the screen with unit counts well in excess of 100. Throw in some Graugs, drakes, elemental effects such as the aforementioned drake’s fiery breath, and the enormous multi-tier structure of the fortress itself, and you’ve got quite the visual feast to tuck into. 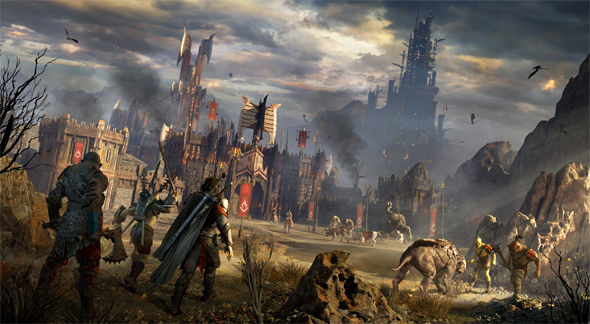 Also honouring the traditions of its forefathers, Shadow of War makes the most of the latest PC hardware to bring that spectacle to life. And with the new comes the opportunity to do just that: make the most of it. From now until October 16, when you purchase select GeForce GTX 1080 Ti and graphics cards, systems, and laptops at participating retailers you will get your choice of UWP with Xbox Play Anywhere support or a Steam copy of Middle-earth: Shadow of War.

When playing Middle-earth: Shadow of War on a GeForce GTX powered PC you can also instantly capture your favourite moments from the game with Nvidia Ansel. Built into the latest version of GeForce Experience, Nvidia Ansel allows you to take stunningly detailed in-game screenshots in Shadow of War with the press of a button. It’s the perfect way to easily preserve and share the game’s glorious moments without taking you out of the action.

The PC edition of Middle-earth: Shadow of War also boasts support for Nvidia SLI and High-Dynamic Range (HDR): a cutting-edge technology for supported panels that delivers stunningly vibrant, colour rich images to your display. Be sure to download the latest Game Ready driver to get the best possible visual experience and performance in Shadow of War.

The first job in any siege is battering through the outer defence wall, and in Shadow of War your specialist units provide a couple of approaches in achieving it. Demolishers are the most obvious solutions. With bone density levels Eric Cartman could only dream of and towering stature, they’re basically living battering rams. Look for weak points in the outer perimeter like wooden doors, and the Demolisher will live up to its name, sending an impressive volume of splinters and particle effects out with its impact, and creating an entry point. Destructible scenery and particle effects have traditionally been a real workout for your GPU, but as PC hardware continues to reach higher performance standards, studios like Monolith can push the effects further than before. 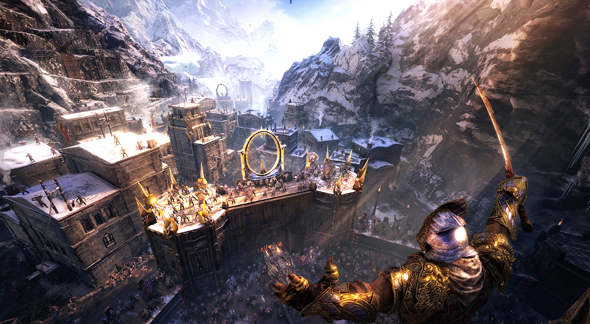 Now it’s about avoiding the enemy specialist units, like Flame Archers – whose name pretty much gives their game away – and Siege Beasts, who carry huge wooden ballistas on their backs. Mordor has no chiropractors or health and safety guidelines, evidently. With the very real possibility of navigating an environment that’s at once snowy and aflame comes a unique vision of warfare on PC, and some unique gameplay possibilities like shooting the ballista’s flaming missiles out of the sky with Celebrimbor’s arrows. Those missiles throw out a huge amount of smoke, and pummel the earth as they land, sending mud in all directions. If Talion and his Demolisher can clear that lot and breach the gatehouse, the whole army is into the fort.

If you favour a sneakier approach, simply send in a spy to infiltrate the walls and set up some explosives near them. When Talion also makes his way in by stealth, he can set off the explosives and destroy the outer wall, letting the army in.

Whatever the approach, Shadow of War revels in the detail of these sieges, and turns destructible environment tech into a meaningful dynamic. The chaos of each siege is set to be on of PC gaming’s standout moments in 2017, and with the new GTX Shadow of War bundle you get to experience it at its biggest and best.

Middle-earth: Shadow of War is now available on PC. You can still score a copy of the game by purchasing the new GeForce GTX 10-series bundle.