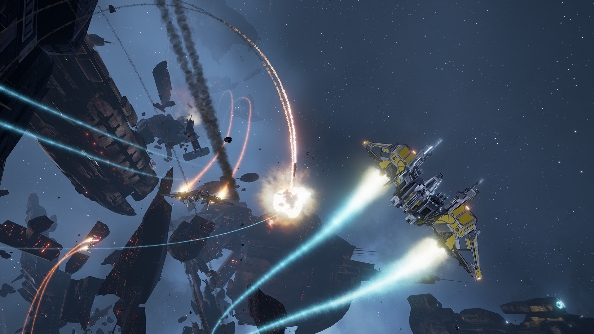 EVE Online’s developers CCP Games originally designed EVE Valkyrie as a tech demo in order to explore the exciting possibilities of VR, but having seen the potential it very quickly evolved into a full-blown VR game. Having been meticulously built from the ground up exclusively as a VR experience, EVE Valkyrie is now being touted as the potential killer-app for the Oculus Rift.

While EVE Online is very much an MMORPG, focusing on the bigger picture including trading, levelling up and having only limited control over individual craft during combat, EVE Valkyrie seeks to put you in the hotseat of a single fighter craft, a position perfectly suited to leveraging the unique capabilities of VR in order to create a staggeringly authentic and immersive experience. Two aspects of the technology weigh heavily in its favor. First, being strapped into a claustrophobic cockpit means that playing the game sitting down feels right and the developers do not have to worry about gameplay that requires a great deal of physical, spatial movement, which is one aspect of VR that game makers are wrestling with at this stage of the technology’s infancy.

CCP Games have also taken great pains to make your immediate environment very convincing, making sure your character’s hands are visible on screen and that they closely mimic the movements you are making in the real world, ensuring that the illusion of being there is not diluted by a mismatch between the on-screen and off-screen action. In addition, despite the brilliance of the Rift technology, your field of view remains restricted when compared to the peripheral vision you have in the real world. Again, this seems perfectly suited to a situation in which your cockpit visibility is restricted by the ship you’re sitting in and the helmet you’re wearing. Delivering this level of immersion in EVE Valkyrie, however, demands that your PC meets specific hardware requirements to get the best possible VR experience. 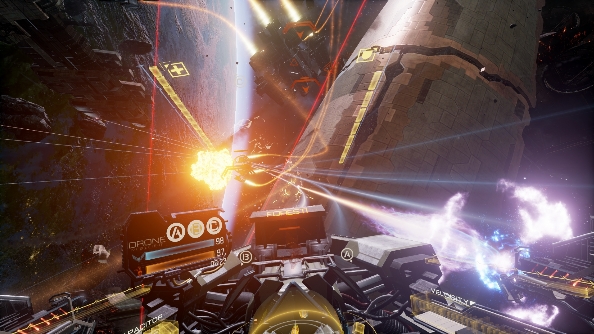 In the game, your window to the universe outside your ship is limitless. The very fact that the game takes place in space gives you an unparalleled sense of freedom. As your ship is corkscrewing through the void you can turn your head and look up and down to take in every detail of your environment from every angle and degree.

And while the game is very much rooted in the EVE universe, this is a much more personal experience. The Valkyrie of the title is a faction of Guristas – pirates – led by a female pilot warrior named Rán and you are one of her trusted allies. The developers have previously stated that they chose a pirate faction because their ability to loot all kinds of cool stuff and upgrades for their ships lends itself to an EVE Valkyrie player’s ability to really enjoy getting know and personalizing their own ship, putting their stamp on the experience.

That’s not to say you’re stuck with a single ship or role though. There’s a progression system based on rank and reputation, you can change load-outs and swap ships and you can unlock new ships, changing class as you go, altering the role you play on the battlefield. 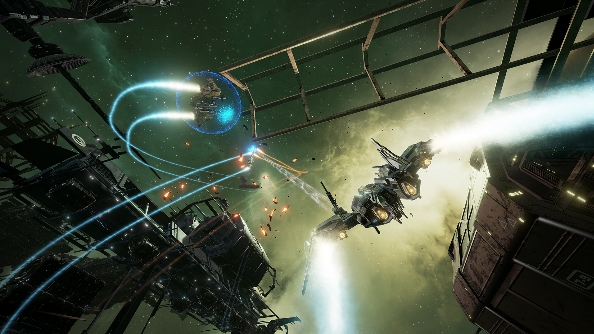 When any dramatically new technology thrusts gaming into unknown territories – think of the change from 2D to 3D, analogue controls, motion control and the like – the first steps into these new territories are always tentative and subject to missteps. But in EVE Valkyrie, we have a game that emerges from an existing franchise, has been built from the ground up for VR and whose subject matter seems perfectly suited to the technology.

Of course, in order to take advantage of the stunning VR experience in EVE Valkyrie,

you will want to make sure your PC hardware is powerful enough for virtual reality. An NVIDIA GeForce GTX 970 is the minimum GPU required for Oculus Rift, but if you’re unsure if your gaming rig is up to the task of handling VR, NVIDIA GeForce and Oculus’ joint VR ready program conveniently identifies if your hardware is capable of running VR.

Oculus Rift launches on March 28 and if you pre-ordered the hardware, EVE Valkyrie comes bundled free.