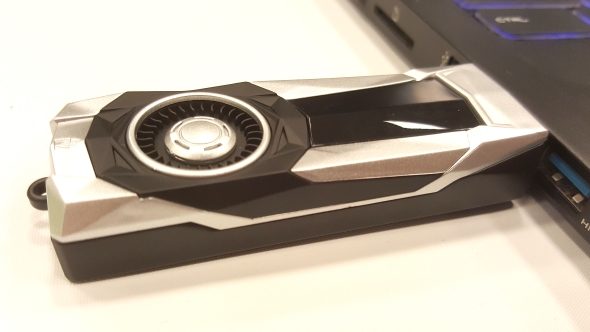 Update June 13, 2017: We’ve just got our hands on one of the limited edition Nvidia GeForce GTX USB drives, and it lives up to the speedy ethos of the green team’s graphics cards.

These USBs sport the classic GTX GPU stylings, but where do the real things sit in our guide to the best gaming GPUs?

Doing some little on-site testing it was hitting around 200MB/s with some chunky media file transfers. That’s born out by the AS SSD benchmark showing 211MB/s read speeds and 143MB/s writes.

That’s not bad for a wee USB drive. It’s not as quick as something like Samsung’s T3 USB-connected SSD, but it looks a lot funkier and comes in a cool Founders Edition style box. 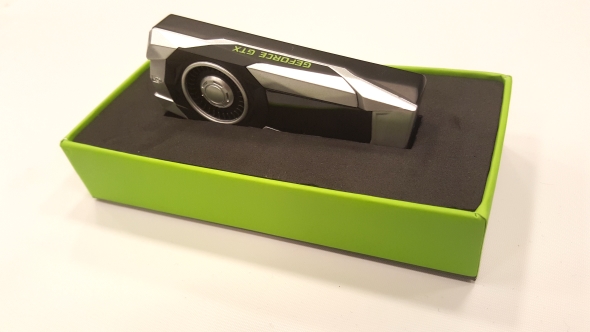 Original story, June 12, 2017: You might have caught Nvidia’s ‘reveal’ of the ‘GeForce GTX G-Assist’ Artificial Intelligence USB stick, a joke product claiming to play games on your behalf while you eat pizza and put your feet up. What they probably didn’t count on is everyone wanting one…

The stick was jokingly billed as a device that would harness Nvidia GPUs to continue playing games for you while you’re AFK, also while doling out your choice of abuse to your enemies (ranging from ‘low’ to ‘crank that s#!t up!’) – a useful feature if your voicebox was getting sore.

The prank was well-received for the most part – with the exception of the odd few who inevitably took it seriously – but the attractive design of the USB itself caught the attention of green team die-hards, who called en masse for the sticks to be put into production.

Not wanting to disappoint their fans, Nvidia have indeed created 64GB USB sticks with GTX styling, but sadly without the features that let you get a good night’s sleep while farming for Steam achievements. Good luck getting your hands on one, though – they’re only giving away 1,080 of them. Get it?

You do, however, still have a chance to be the envy of your fellow nerds – a competition is being run through the company’s GeForce Experience, and you have until June 23rd to enter.

Looks like you’ll still be embarrassing yourself in Dark Souls for the foreseeable future, then. Maybe next year…