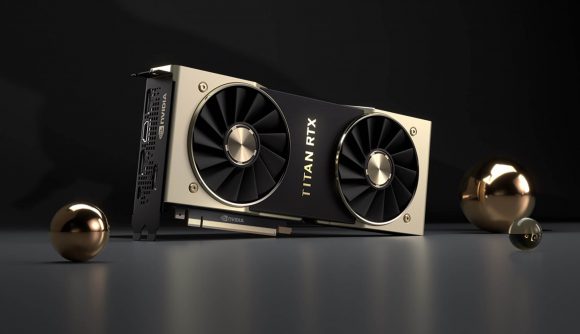 Nvidia has rolled its online GTC keynote announcements into a different format, set to take place on March 24. Keynote information will now be given as part of its news announcement session two days later than the what was originally scheduled. Nvidia hasn’t said where these news announcements will be posted, but there’s a decent chance they will appear on its GeForce News blog. This will be followed by an investor call with Nvidia CEO Jensen Huang, available at 08:00 PT (15:00 GMT) over at Nvidia’s investor website.

Nvidia’s Graphics Technology Conference (GTC) was originally scheduled to be an in-person event from March 22, and then it wasn’t. Due to COVID-19, the GPU giant decided instead to host its conference entirely online, responsibly eliminating any potential concerns whilst still having the talks by many industry leaders available to attendees.

Nvidia since cancelled its keynote “in light of the spread of the coronavirus,” but this only lasted a short while before keynote announcements were scheduled to form part of its March 24 news announcements session. Other sessions will go on as planned, starting on March 25.

Apart from the fact that the event is hosting a competition to win a free Titan RTX GPU (and, by the way, you can still enter that contest until March 27), it’s also hosting some talks that should be of interest to gamers. In particular, Nvidia’s ‘Graphics & VR / AR’ section lists topics such as “graphics – real-time rendering and ray tracing” and “virtual reality / augmented reality.” With AMD recently announcing its RDNA 2 architecture – an architecture that will be realised in GPUs with hardware-accelerated ray tracing support – Nvidia’s ray tracing talks are extra timely. Ray tracing is quite the hot topic at the moment, and it’s still very much Nvidia’s gig – for now.

So, despite the necessary delays and format changes, Nvidia’s show will go on, and maybe, just maybe, we’ll get some information on the rumoured Nvidia Ampere GPUs… but probably not.

Outside of its impact on the tech world, COVID-19 is having a massive human impact. If you’d like to help out, you can lend your gaming PC to help fight the Coronavirus with [email protected]. This app lets you donate your PC’s unused resources to help researchers better understand the COVID-19 virus.