Hey, Computex isn’t all about AMD, you know. Even if the red team has the Computex keynote all to itself, there are other tech firms vying for your love from the show with their own grand events and product launches. One such company is Nvidia, who’s just gone and announced a whole new laptop lineup tailored specifically to the needs of content creators and creative professionals dubbed: Nvidia Studio.

Nvidia Studio is made up of both software and hardware guarantees to ensure that content creators will be able to confidently and consistently edit, create, and even still game on portable machines without hindrance or sluggish performance.

First up, the hardware. Nvidia is re-energising the mobile workstation market with a whole heap of Quadro mobility GPUs, headlined by the Quadro RTX 5000. But there’s more to an Nvidia Studio laptop than simply a powerhouse Quadro GPU, rather, the company has also put together an extensive list of system requirements – everything from SSD capacity to CPU – it deems necessary for a solid creative workstation.

There are 17 confirmed Nvidia Studio designs in total – including those from Acer, Asus, Dell, Gigabyte, HP, MSI, and Razer.

Each one is suitably kitted out to the below specs:

Nvidia also requires certain colour gamut assurances, although has been so far a little light on the details. 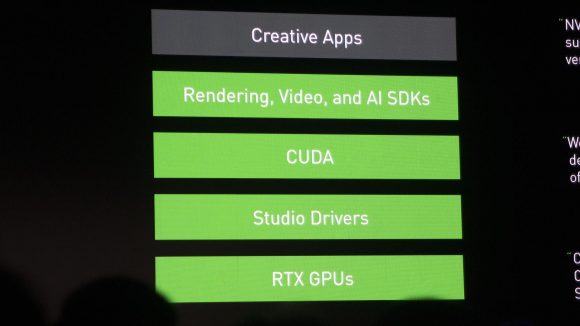 And hand-in-hand with shiny new hardware comes slightly less shiny software in the form of Nvidia Studio drivers. These are identical in all but name to Nvidia Creator Ready drivers and will be subject to the same thorough testing for creative applications and multi-app testing.

The new Studio drivers will be available across Quadro, Titan, Turing RTX/GTX, and Pascal graphics cards.

And not to fret if you’re a streamer or YouTuber, these drivers will come packaged with the latest game optimisations albeit on a slightly slower cadence than their Game Ready compadre