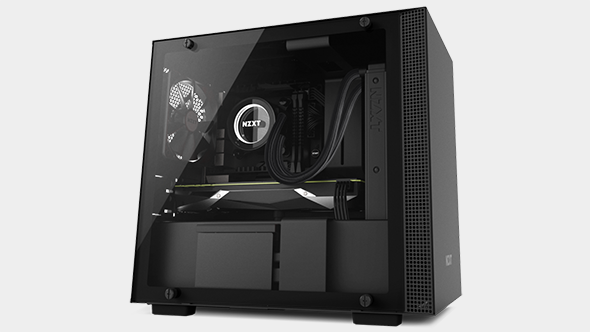 The NZXT H200i is a fantastic small form factor PC case that walks a fine line between compactness and functionality. NZXT has somehow managed to support a wide range of graphics cards, PSUs, and air / liquid coolers, all without sacrificing those all-important style points.

If you are looking for a compact gaming machine, you can certainly find cases smaller than the H200i, but rarely so well put together. NZXT hasn’t tarnished its reputable name in case design, and seemingly miniscule details – such as the branded velcro cable tidy behind the side panel – are testament to how this case has been built from the ground up for an entirely hassle-free building experience.

Want a tenkeyless keyboard to sit alongside your small form-factor gaming PC? Here are the best compact gaming keyboards on the market.

The NZXT is a joy to build in. I don’t say that lightly, especially in the small form-factor arena. Bad machining and languid case design can often ruin the joy of putting together a brand new PC, but you won’t find any of those rookie errors from the evidently well-versed NZXT team.

The cable tidy is easily manageable and smartly hides all the clutter while largely keeping out of the way, and cable management is a dream with pre-routed guides and captive velcro straps. You can even fit an entire 240mm liquid all-in-one cooler and three SSDs with ease, and there’s no sharp edges to cut your fingers to shreds while you do it. It’s a builder’s dream. 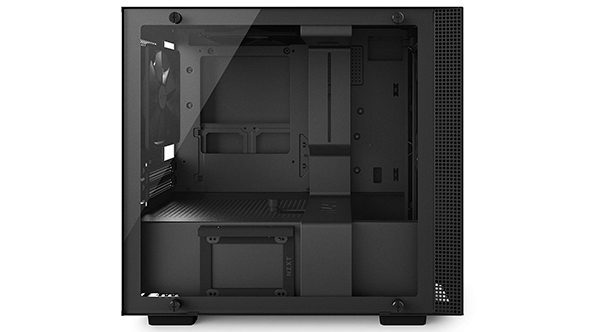 The story stays the same post-build. There’s space for two 120mm fans or 240mm radiator in the front, one rear 120mm fan, and one 120mm in the top – you also get two AER fans in the box. While I maintain a blower-style card, or watercooled unit (if you don’t mind the expense), is best for a build of this compact size, the perforated PSU shroud allows your graphics card to breathe a little easier no matter the card you opt for – just ensure it’ll fit first.

With a 240mm radiator and two fans mounted in the front, only a few millimetres are going spare with a Founder’s Edition Nvidia GTX 1070 installed. As such, any GPU over 270mm in length is a no-go without an air cooler for your CPU. Even so, you are still pretty limited on space as you might expect. 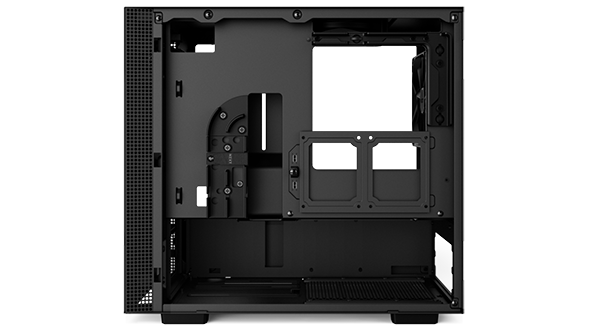 While some miniature cases are as hot as the sun in exchange for compact size, the H200i offers plenty of airflow on par with some much more spacious mATX cases. This is likely something to do with the case’s comparatively large size for a mini-ITX, however, the smart design certainly aids in keeping heat flowing out of the case.

If I had one gripe with the design it’s that I would’ve liked to see the top exhaust designed with some sort of cover to obscure the screws from view, similar to the NZXT H700i. But otherwise the minimal visuals are fantastic. The tempered glass side panel is fitting with the case’s composition, and it’s available in either black, red, blue, or white. That side panel’s addition does make for a pretty heavy SFF build all-in, however. 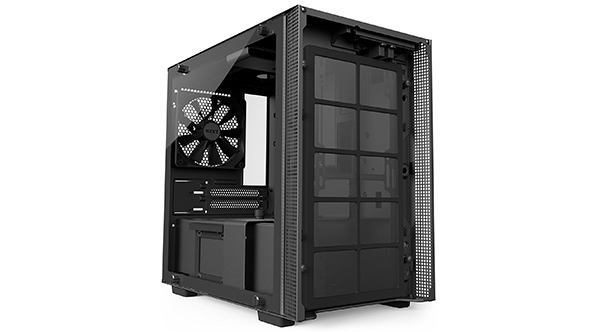 Let’s move onto price. At $130 / £126, the H200i is far from cheap. But that’s all down to the largely unnecessary smart functionality. That little ‘i’ suffix means this case comes with an integrated fan controller and LED hub with single RGB LED strip included. I’m in no way opposed to fan controllers as a concept, but CAM software controlled ones make it onto my cons list until the day that software is a little less overbearing.

Luckily, NZXT has answered the call and released the dumb H200. This almost identical models sheds the integrated smart functionality and $40 along with it. That’s a deal I can’t refuse.

Regardless, NZXT has put together another premium case with the H200i. It’s spacious (through clever design), manages to maintain a clean aesthetic while housing a tower’s worth of cables, and won’t cause your graphics card to combust. If you want all that, and some pretty lights, you won’t be left disappointed by the NZXT H200i.