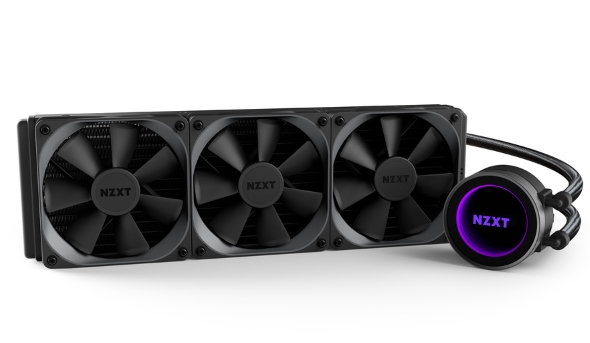 NZXT have released their first 360mm all-in-one liquid cooler to date, jumping on the growing trend of enormous chip chillers. Building on their successful Kraken X series, the X72 aims at the high-end enthusiast overclockers, and those with an abundance of space in their rig.

Here’s the full breakdown of the best liquid coolers we’ve tested to date.

With three Aer P 120mm fans side-by-side, only lumbering full-tower designs, and spacious mid-towers, will be able to take advantage of this elongated 394mm-long radiator design. But, if you are all good on space, then the usual suspects of Intel and AMD sockets – including Threadripper’s TR4 – are supported by the Kraken X72.

With massive cooling potential, it seems somewhat of a shame that the cold plate affixed to that triple rad isn’t Threadripper-optimised and won’t offer full coverage across both of the – potentially eight-core – CCXs within these behemoth processors. With 12nm Threadripper incoming later this year, the potential is there for manufacturers to develop really chunky coolers for use with these similarly chunky chips.

The X72 uses the same pump design as we saw on the other Kraken X series coolers, so it comes at no surprise that this cooler makes for a strong statement. It’s big, bright, and it is oddly tasteful for an RGB-laden style. It is design-centric NZXT, after all. 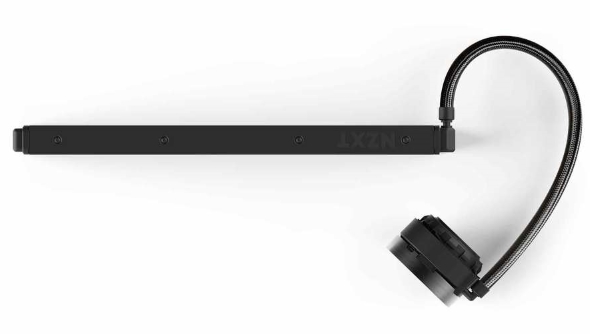 When it comes to performance, the X72 manages some pretty admirable scores compared to the 280mm X62 – but they aren’t game-changing. Unfortunately, we don’t have the 360mm Corsair H150i Pro for comparison, but we got the 280mm Corsair H115i Pro all-in-one cooler to drop into the mix.

Chunky coolers like these are a little overkill for a non-overclocked system, however, so it would be remiss of us not to push these all-in-one loops a little further. A few subtle tweaks and our i7 8700K settles nicely at 5GHz and 1.35V. That high voltage causes far more heat to exude from our chip, and under gaming load in Civilisation VI’s AI benchmark, temps reached a peak of 80°C for the Kraken X72, 81°C for the X62, and 85°C for the H115i Pro.

And that means you need to have very specific needs to justify opting for the Kraken X72. It’s an adept cooler, and unsurprisingly, it stays extra quiet thanks to its deluge of fans – although they aren’t quite maglev-silent under really heavy load. Regardless, it’s hard to recommend the X72 – unless you’re constrained by a specifically restrictive chassis, or some exceptionally demanding workloads. NZXT’s Kraken X62 is $40 cheaper, almost as proficient as its bigger sibling, and it looks just as stunning.