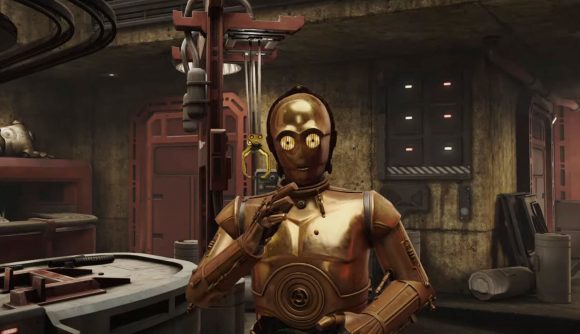 Yesterday’s Oculus Gaming Showcase revealed some of the new titles coming to the company’s best VR headset, the Quest 2, and it’s a particularly exciting time if you’re a Star Wars fan. Star Wars Pinball launches next week, and the second part to Tales from the Galaxy’s Edge is scheduled for later this year.

The first title was on the shorter side at around four hours long, so a sequel announced so soon after the original’s November 2020 release is welcome news. Oculus doesn’t give a specific release date for the game just yet, so we could still be waiting a few more months. A VR pinball game could fill that Star Wars void in the meantime when it lands on April 29, however, as you’ll be able to explore and decorate a nostalgic room called ‘the fan cave’, as well as competing for top of the leaderboard.

Star Wars isn’t the only thing to come out of Oculus’s presentation. Capcom’s 16-year-old Resident Evil 4 will also be getting its own VR release, but with several changes from the original. You’ll be able to dual wield weapons, and swap weapons by grabbing them off your person, rather than navigating through menus.

The Quest 2 is a top choice for a VR headset right now, especially if you’re struggling with the current lack of GPU stock. Its built-in ARM chip means you can use it without tethering yourself to a gaming PC, letting you smoothly play the best VR games in 2021, even if your current rig isn’t up to scratch.