After Oddworld: Abe’s Oddysee launched in 1997, developer Oddworld Inhabitants was given just nine months to turn around a follow-up title. Somehow, by November 1998, a second game, Abe’s Exoddus, had been brought to life. Now, 20 years later, series creator Lorne Lanning is reimagining that sequel.

Oddworld: Soulstorm started life as another ‘New ‘n’ Tasty’ game, following on from 2014’s ground-up remake of the first game in the Oddworld quintology. That original plan, however, was scrapped early in development, as Lanning decided he wanted to make the Exoddus he didn’t have time to back in 1998.

The result is not really Exoddus but a brand-new Oddworld game. Abe will still be fighting to free his people, the Mudokons, from slavery, but Soulstorm is darker and more industrial than its predecessor. During my hands-off demo, I get to see a sprawling factory, where enormous locomotives can come screaming out of nowhere, rushing past in a wall of noise before disappearing into the distance.

Thankfully, Abe can wreak havoc on this mechanical hellscape. As you progress through each level you can recruit Mudokons to your cause. Doing so offers more solutions to problems later in the level, but it also means your new allies abandon their workstations, and that has consequences. As the factory becomes less efficient, the alert level rises, and enemy guards – known as Sligs to fans of the series – will become wise to your uprising. 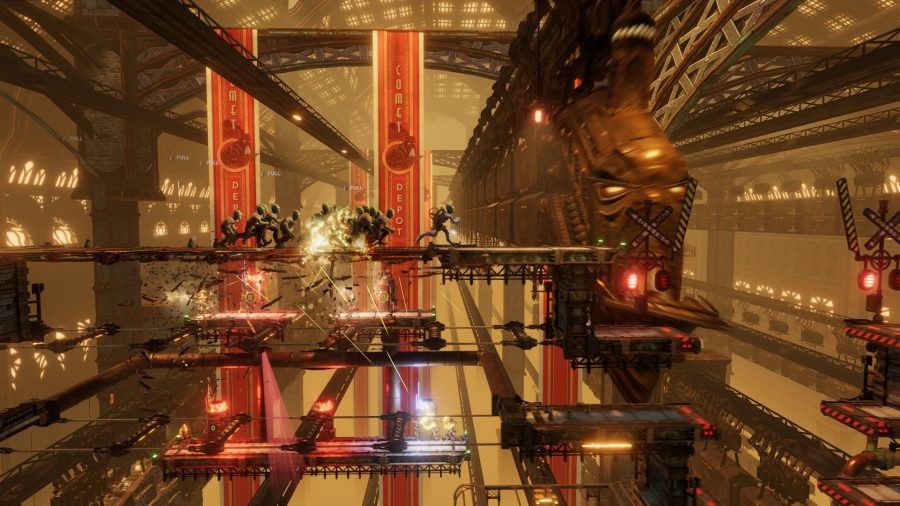 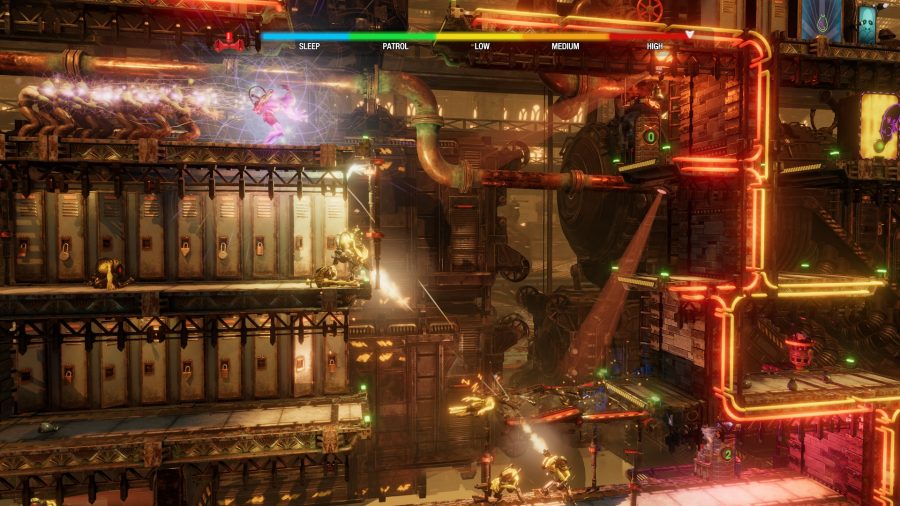 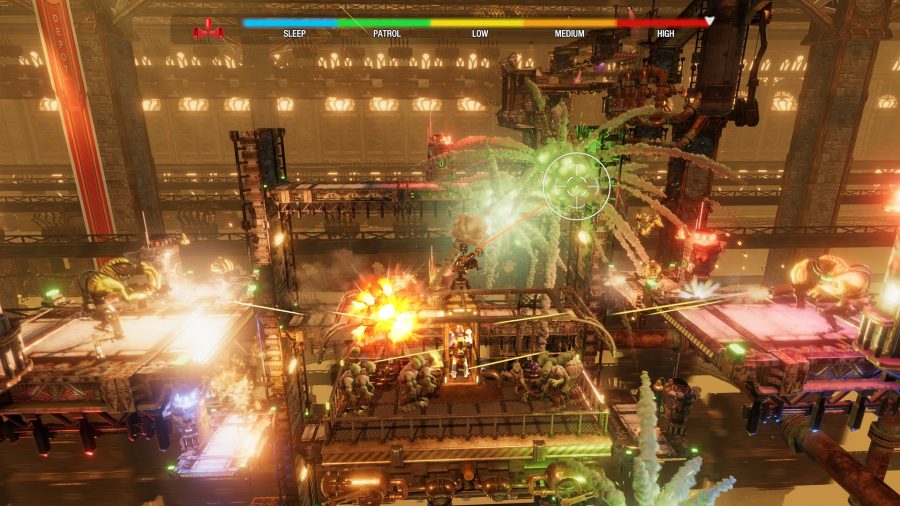 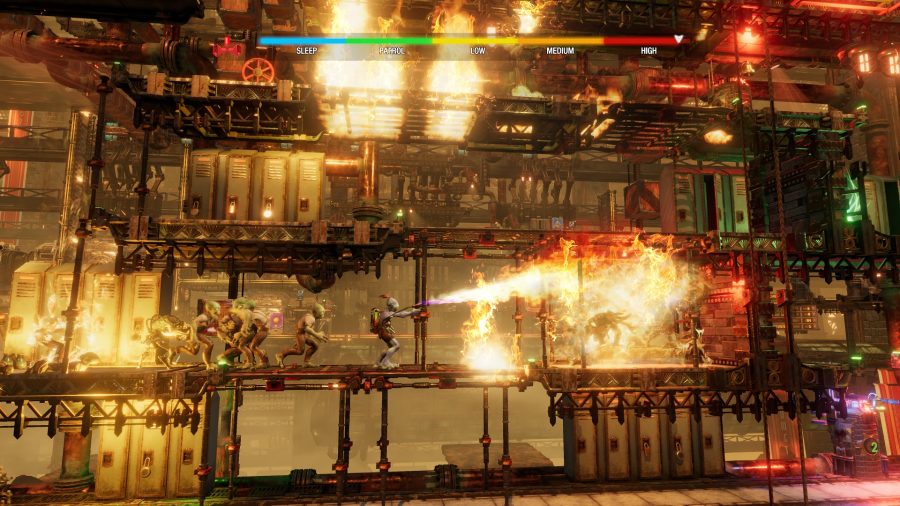 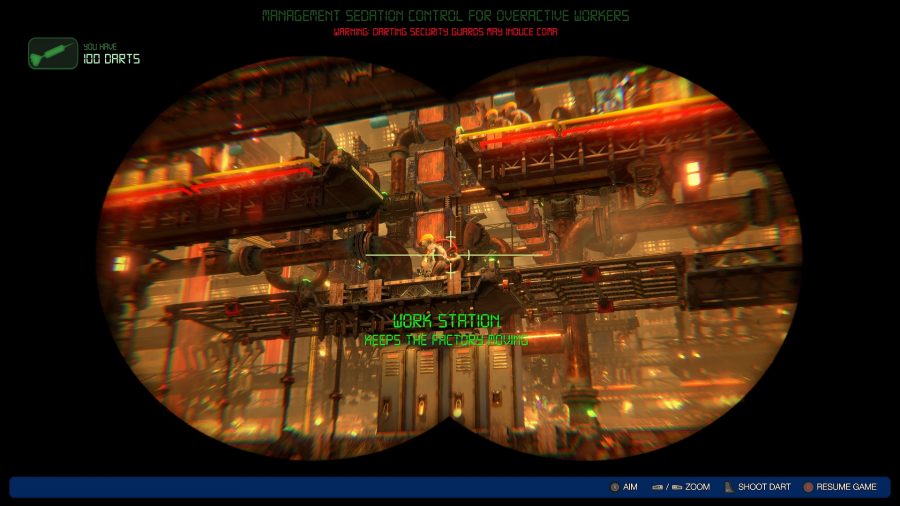 Fighting them off will be easier than ever before. For one thing, you’ll have access to the titular Soulstorm Brew, a highly-addictive, highly-flammable drink. Launching a bottle of the brew can entirely change the layout of a level as real-time fire sticks and spreads to every surface. If a structure is damaged enough, it’ll collapse, forcing both Abe and his enemies down a different route.

the black comedy leads into the game’s serious themes

If you prefer a less chaotic approach, though, you’re still well catered to. You’ll be able to scavenge for parts which can be combined with items purchased from vending machines dotted throughout the factory. Filling a drinks can with nails and lobbing it towards an unsuspecting guard will spell the end for them, but if you’d prefer more of a pacifist approach, popping candy is a viable alternative.

The breadth of the crafting system will help make Soulstorm more replayable than the Oddworld games before it. And I’m told that your style of approach to the game’s challenges will also have a major impact on the outcome of the plot. At the end of each level, you’ll be confronted with a tally of rescued Mudokons and murdered Sligs, and a branch in the story means your ending will change based on your actions. 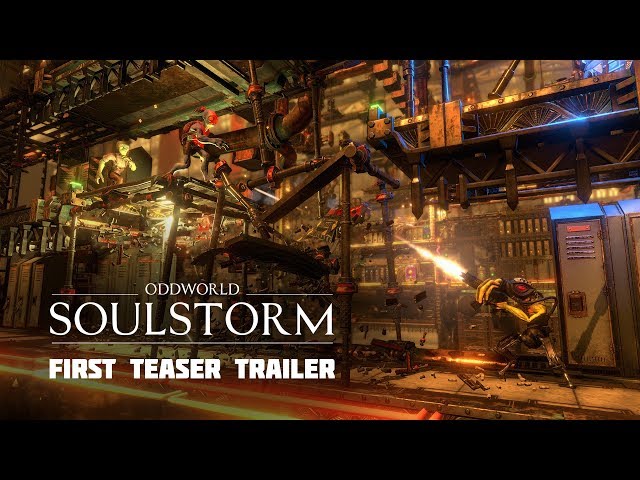 While advances in technology over the past 20 years have allowed the game’s combat to become far more sophisticated, Soulstorm maintains the dark sense of humour that the series has always embodied. An air of deadly slapstick pervades, and many of Abe’s unwitting followers meet their end on the front of the trains racing through the factory. As with previous Oddworld games, the black comedy leads into the game’s serious themes of addiction and human trafficking, told in a way that’s inspired by games like Limbo and Little Nightmares.

Want more? Get a load of the best adventure games on PC

With three more games planned to follow in its wake, Abe’s next adventure promises to be an important next step in completing the five-part Oddworld Quintology that’s been in the works for more than 20 years. Capturing that original tone after so long is no mean feat, but Oddworld: Soulstorm manages to be both a nostalgia trip for longtime fans and what looks like an attempt to push the entire series forward.