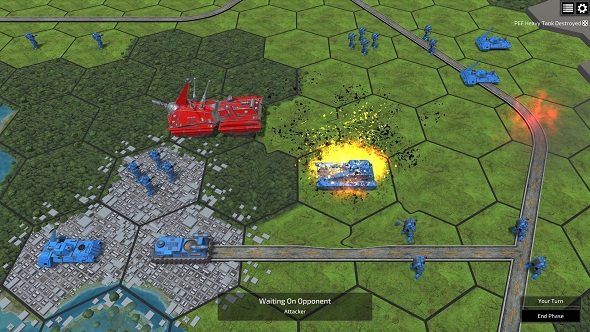 You might not know the name Steve Jackson, but you’ve almost certainly felt the effects of his work. He started Steve Jackson Games in 1980, a company which publishes all kinds of physical and tabletop games. They’re responsible for publishing a little game called Munchkin. One of Steve Jackson’s first games, though, was Ogre – a war game about a massive cybernetic tank (the Ogre) that demolishes anything in its path.

Here are some more multiplayer games available for PC.

Now Ogre is coming to PC thanks to developers Auroch Digital. It’s a completely official adaptation of Steve Jackson’s game, featuring an all-new campaign to follow. The aim of Ogre is to defeat your enemy. In the case of the red team, that’s to use your Ogre to destroy enemy defenses, as an unstoppable weapon of war. For the blue team, you’ll use all sorts of defenses to prevent the Ogre from moving forward and destroy it.

Interestingly, this isn’t the first adaptation of Ogre, but the last time it was made into a videogame was in 1986 for MS-DOS, Apple II, and other machines of that time. That version was made by Origin Systems, the folks behind Ultima and Wing Commander. This version, on the other hand, is the result of Ogre’s incredibly successful Kickstarter back in 2012, which promised a videogame version to be released. Here it is!

Ogre is coming out on Steam October 5 – here’s the link to its Steam page.