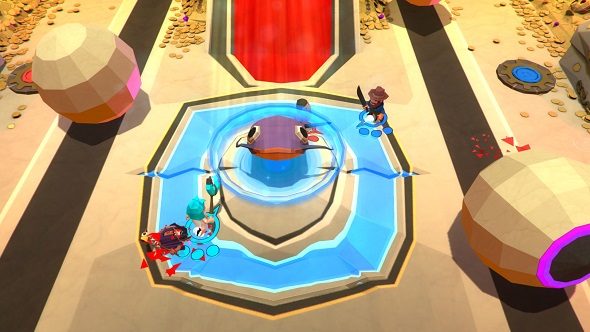 Promising frantic ‘Capture-The-Head’ action, the couch multiplayer game Oh My Godheads has made its way onto Steam Early Access. Rather than fighting over an inanimate flag, Oh My Godheads has players scrambling to capture the head of an angry deity while dodging swords, lava and exploding pies.

Those looking for things to play at a party, check out our list of the best PC multiplayer games.

Each of deities reacts differently to be picked up and carried, with the Agyo head exploding in anger after being held for too long or the Bastet head reversing your controls as you carry her. If you manage to get the head to your team’s plinth, you’ll gain a point and access to a special power like mind controlling nearby enemies. These abilities differ from god to god, with developer Titutitech hoping to balance all of these powers during their early access period.

There are other game modes besides the core ‘Capture-The-Head’ mode, with King of the Hill having all four players trying to hold the godhead for the longest time while Headhunters has players racking up the most kills within a time limit. Titutitech are promising quite the heady mix of modes in the full release, promising that at least two new godheads and one new map will be added before the official launch.

As for maps, Oh My Godheads has players fighting in locations related to each god’s mythology, so expect to run around within the depths of an Italian volcano or on top of a gleaming Aztec pyramid during a play session. While some arenas are fairly basic, others have players negotiating between moving platforms, spinning axe-blades and pools of molten lava. A session of Oh My Godheads is guaranteed to be mayhem, making it a great game to play at a party.

You can fill in spots with AI controlled players and there are a series of single-player challenges for those who want to practice their treasure collecting skills solo. For those interested in giving this manic multiplayer collect-’em-up a go, Oh My Godheads is available on Steam Early Access for $14.99/£10.99. Titutitech is planning for the game to be in early access for a few months, with the price either staying the same or slightly increasing on launch.