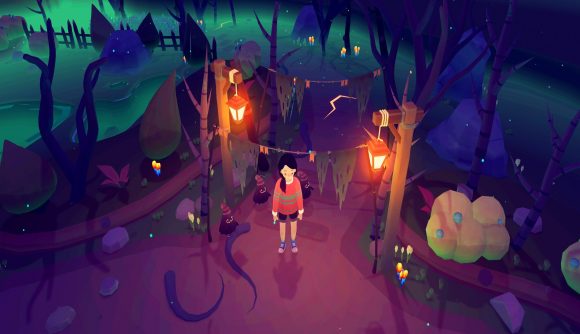 Don’t you hate it when seasonal content just disappears into the ether? Thanks to this annoying trend, my Agent 47 will never know the fluffy feels of a santa hat on his glorious bald dome. But, never fear! Indescribably adorable farmy-dancy-dressy-uppy simulation game Ooblets is getting a whole new region for Halloween, and according to the Ooblets Twitter account, it won’t just be a limited-time seasonal update, either.

“Anyone else hyped for Halloween Month?,” Ooblets developer Glumberland recently asked on Twitter, before sharing a short clip and a couple of screenshots from the 0.4 Nullwhere update. From the shots, it looks like a gloriously Ooblets twist on what you might think as a traditional Halloween region. We spotted some effervescent swamps, gnarled trees, and tiny ghost lads that might be spooky if they could stop being adorable for a few seconds. They can’t.

A few users have asked whether the content will be limited-time. Good news: It absolutely won’t. In the comments to the Twitter thread, the dev confirmed the update will “stick around” past Halloween itself.

The shared shots look to tease some new characters arriving in the Nullwhere update. The account also hints that the studio might be rolling out ultrawide support in the same update, but it’ll “see how testing goes.”

Anyone else hyped for Halloween Month?? 🎃👻

We're getting ready by putting the finishing touches on our first big content update for Ooblets, the 0.4:

Don’t forget to check out the best farming games on PC. Or, if it’s more adorable critters you want, here’s the best ways to get yourself some Pokemon on PC. If you want to combine the two, though, you’re probably best just sticking with Ooblets.