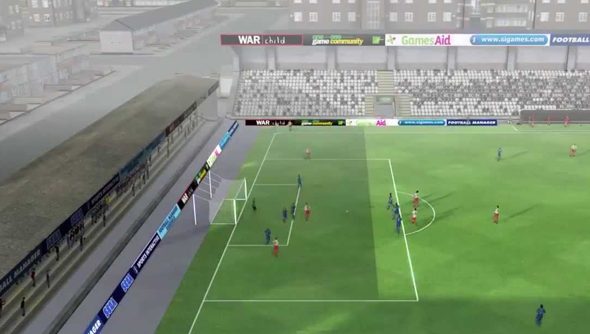 I have a distinct memory of watching Top of the Pops every Friday of 1999 and becoming slowly distraught that Cliff Richard’s stranglehold on the no. 1 spot with some interminable Christmas ballad had begun to creep too far into Spring – which is odd, because I can’t find any record of it now.

Here’s a certifiable fact, though: Football Manager 2014 has been at the top sales rung in the UK for 16 weeks on the trot – a new record for the most consecutive no. 1s in PC chart history.

Sports Interactive’s own manager, Miles Jacobson, told MCV that sales were slightly lower than for FM’s last iteration this time in 2013. Some of that’s down to the continuing slide to Steam – the UK PC charts only account for hard-to-the-touch high street retailers – but Jacobson noted too that the game had been cracked relatively early this year.

“We were cracked within a week and a half this time, which is a normal cracking time. It’s disappointing, but such is life, we were always going to get cracked, it was just a matter of when,” he said.

“We do budget to be cracked, the people we’ve hired is based on how many we normally sell, not how many we sold last year, which was a bit of anomaly.”

Football Manager 2013 went uncracked for five months, and this time last year had sold 22% better than its predecessor.

So why the chart domination, if FM2014 hasn’t outsold its last iteration? It’s not entirely good news. Diminishing space for PC games in high street shops means that retailers will sell only the bestsellers – and that apparently means Football Manager.

“Because of the launch of Xbox One and PS4, there is less shelf space for PC. Shops only have a finite amount of shelf space and they are going to go with the products that are performing well,” said Jacobson.

“The job that Sega and retail have done working together meant Football Manager has had much better coverage than a lot of other PC titles. Being able to get the support we have had from GAME was great and also the supermarkets, we had [display stands] in more stores than we ever have before. And that was very important in reaching the achievements we managed so far.”

Last year, Jacobson told the London Games Conference that Football Manager 2013 had been downloaded illegally on 10.1 million occasions – including once in the Vatican.

Do you buy your copy of Football Manager in a box? FM2014’s place today in the top five most-played Steam games suggests plenty don’t.