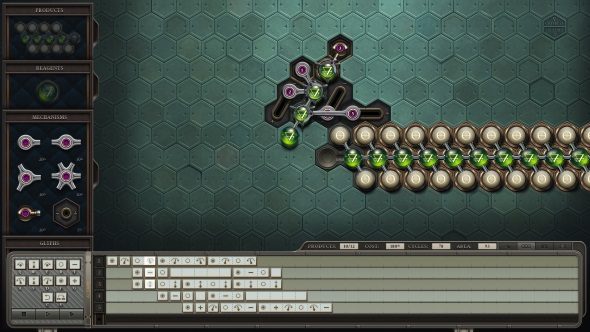 The problem-solving puzzle games of Zach Barth and his studio, Zachtronics all share a variety of key elements: They’re freeform, they reward creativity, they’re genuinely challenging and broadly brilliant, and they’re all available on GOG… except for one.

Much to the developer’s surprise, despite glowing praise and positive reviews from all quarters (including a GOTY nod from us), his latest title – the alchemy-themed Opus Magnum – has been rejected from release on the store, and CD Projekt aren’t giving any explanation why.

The lack of any Zachtronics game on our list of the best indie titles on PC is a problem we’ll have rectify, but it’s a pretty great bunch of titles anyhow.

Sharing his frustrations with the world, Zach Barth went as far as asking GOG for their specific reasons for their rejection of the game. While their response was a bit of a non-answer, he shared it with the world via Twitter, so we know what’s going on as well as he does.

I’ve had a bunch of people ask me if Opus Magnum will ever be available on GOG. Here is the response I got from them when I asked for a reason I could share publicly for why they didn’t want to carry it. We would still like to be on GOG if they change their mind! pic.twitter.com/Nwb7JzLVI1

One theory that’s been floated for the rejection of the game is that it doesn’t look modern and polished enough to fit whatever aesthetic requirements GOG are looking for, but even that crumbles when you realize that TIS-100, a text-mode programming game by Zachtronics is already on the store.

With GOG unwilling to share their reasoning, all we can do is hope that they change their mind. That, and buy the game elsewhere. You can pick up Opus Magnum (and you probably should, as it’s excellent) via Steam or Humble for an RRP of £15.49/$20, with links to both store pages listed on the official site here.

Personally, I think Infinifactory is a slightly better game overall, but that’s neither here nor there.