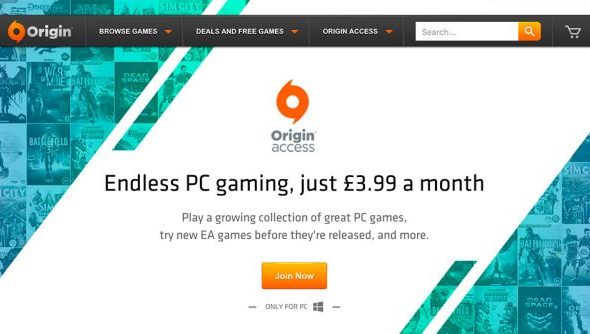 Normally, the videogames on-demand subscription service costs $4.99 a month, so it would cost almost $60 over the course of a year. Now EA are letting people pay off a year in one go, and it’ll only set you back $30.

If you want stuff for nothing, check out our list of the best free PC games.

That $30 will get you a ten-hour trial with Battlefield 1, and no doubt there will be a similar deal a week before Mass Effect: Andromeda comes out. Then there’s the library of games you get unlimited time with in the Origin Access Vault.

There’s also a free trial available at the moment. Check out the details, as well as the names of the games in the Vault, in the original story below.

Original Story February 14, 2017: Some people don’t like Origin because they want all their games in the same place. Thing is, it’s actually a decent service now. What makes Origin really good, though, is Origin Access, which lets you play a bunch of ace games for a monthly subscription that costs the same as one of PCGN writer Matt Purslow’s sandwiches. Okay, maybe half a Matt Purslow sandwich.

The free trial is only available for a limited time, but it gives you unrestricted access to the entire vault for the duration. You could easily complete a game or two in that time. You also get 10% off purchases on certain games, and sometimes subscribers get free trials. Mass Effect: Andromeda is getting a ten-hour one.

Sign up on Origin if this sounds good. If you decide to keep it, it’s £3.99 a month or £19.99 a year and you can cancel any time. Here’s what’s currently available to play in the Origin Access vault: