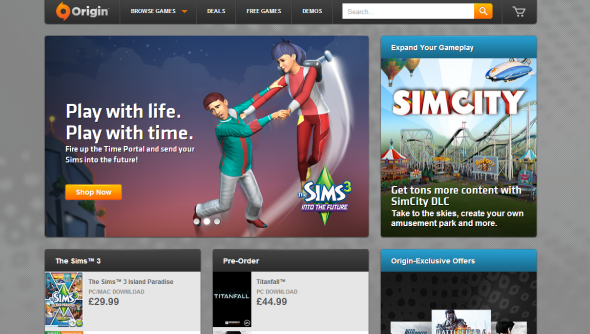 EA have rolled out their latest Origin initiative across 20 countries today: a comprehensive refund policy designed to “make things right if you decide the game you just bought didn’t live up to your expectations”.

So you’ve woken up and there are shrugging synapses where your memories of 11pm to 2am should be. You perform a trepidatory mosey about your desktop and – oh, no – it turns out you’ve gone and bought SimCity.

If you’ve launched it already, you have a full 24 hours to Jack Bauer your way over to the Order History page, crawl through broken glass to reach the ‘request a refund’ link next to your last purchase, answer “a few quick questions”, and then leave the business of disposal in EA’s capable hands.

If you haven’t launched the game, you’ll have seven days to return it. For pre-ordered games, the timer begins ticking on release day.

“If something doesn’t work out – you aren’t riveted by the storyline, or sucked in by the action, or even just if the game doesn’t play well with your video card – we’ve got your back,” EA’s Thierry Nguyen wrote on the Origin blog.

The Origin Great Game Guarantee, as they’re calling it, is a much clearer and farther-reaching policy than that employed in the wake of SimCity’s implosive release – which saw EA both generously offering refunds and steadfastly not doing refunds at practically the same time. It’s also uniquely well-suited to PC gaming – a field in which the functionality of the thing you’ve just downloaded is subject to a near-infinite number of unpredictable variables.

So, yes: 20 countries today, and EA promise to have everyone covered by the Origin Great Game Guarantee by the end of September.

The offer presumably doesn’t extend to the games featured in the Humble Origin Bundle, which has to date seen seven EA games sold for charity a million and a half times at an average price of less than $5.

Steam, meanwhile, continues to operate under a no-refund, no-resale policy that has lately seen them become the target of a German consumer rights lawsuit. Can they do better?