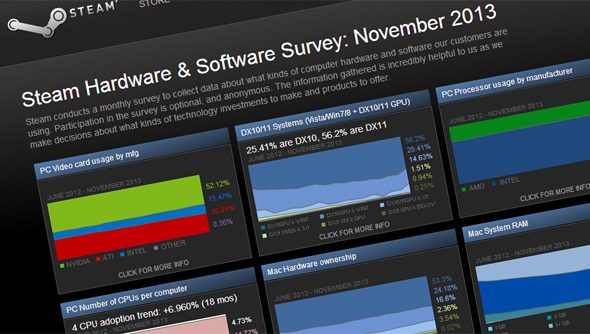 That’s a thing I heard a person say yesterday. But it’s demonstrably not true. I run its latest version, at least half the time, and maybe you’re part of the 18.45% of Steam users who do too.

Windows 8.1 has started to pick up Steam. Or rather, the other way around.

In its Hardware and Software survey for November, Valve recorded that 18.45% of Steam users are running Windows 8 of one kind or another. That’s up more than 6% from a Valve survey conducted in April, which revealed that Windows 8 was running on about 12% of Steam users’ machines.

12.11% of Steam users today run bog standard Windows 8, while 6.34% run the newest version of Microsoft’s OS. Use of 8.1 has grown 4.17% since the most-recent survey – though it should be noted that 3.72% of those gains come from existing Windows 8 upgrades.

Windows 8.1 has long since overtaken OS X and Windows Vista, and appears to have supplanted beloved XP in PC gamers’ affections. XP currently represents 6.17% of Steam’s userbase, down slightly from the last survey.

Windows 7 remains far and away the most popular OS on Steam, however, accounting for more than 64% of its population. Its total isn’t falling, either – in fact it’s risen, almost imperceptibly.

Maths, eh? The things it can tell us. What OS are you lot playing the majority of your games on? Do you have any plans to change?

Here’s our Steve’s breakdown of the 10 coolest features of Windows 8.1. Just like the tiles, you get used to the spiders.