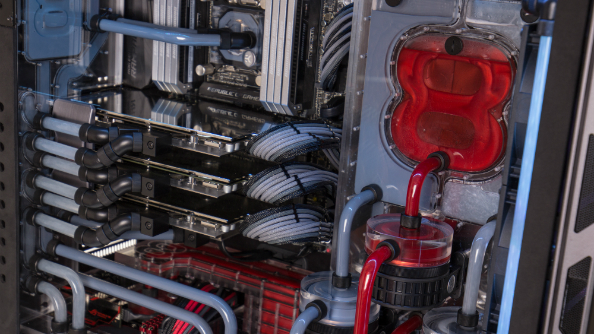 Throw enough top-end, money-no-object parts in a PC and you’ll eventually ascend past the realms of “well that’s not very good value for money” and enter “crikey, just look at it” territory. That’s clearly the rationale of this watercooled, overclocked, 3-way SLI PC built by Overclockers. It looks like a flyover of the Las Vegs strip, and features more expensive componentry than Arnie in Terminator 2.

Got yourself a powerful PC? Put it to the test with the best VR games for the platform. They’ll sweat that GPU.

In addition to that three-way SLI setup, a bespoke liquid cooling loop and all those bewildering colours, there are actually two separate systems operating in this machine. There’s an ITX stystem tucked into the underneath of the case, because hey, why not? Here’s the full list of specs for both systems:

ITX system (located at the bottom)

You can find out more about the monstrous build over at the Overclockers UK site, or – gulp – buy one. Pricing details aren’t revealed yet, but don’t expect anything that won’t make you weep openly when you see it leave your account.