Watership Down broke me as a child. Seeing cute cartoon animals being torn to shreds can leave an impression on a tiny human. Who knew? But while the movie left me emotionally scarred, it did give birth to a fondness for bunnies. I just wanted to protect the furry little creatures, at least until the day my parents got me a real pet rabbit and it bit me on the nipple. Rabbit nipple bites hurt, by the way. After that, I could take or leave rabbits. Suddenly, Watership Down didn’t bother me as much – you get what you deserve, you teat-chomping shits.

If my love for rabbits began to fade with that incident, then playing Overgrowth has killed it completely. Now? Rabbits can get in the bin, frankly. They are vicious. Overgrowth is a game about homicidal bunnies who kick seven shades out of other anthropomorphic animals, stabbing, choking, and fly-kicking them directly in the throat. It’s bloody, it’s violent, and it is not as good as it sounds. My editor pitched it to me as ‘Absolver with rabbits’, but the reality is ‘Goat Simulator with combat, minus the comedy’. 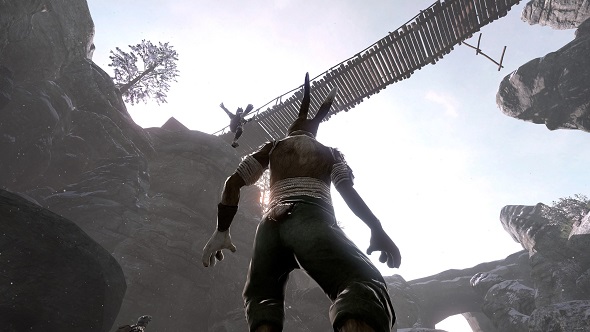 Overgrowth has been in development for ages, and while it is still in its final beta version, you wouldn’t know it. It has got the familiar jank of physics-based comedy games that have become so popular over recent years, the environments are barren and dull, platforming is floaty, and combat is about as deep as an evaporated puddle. Oh, while we are on the subject of water – water is death in Overgrowth. A lot of its platforming sections are built around this fact, asking you to bound between distant icebergs, or to hop across lakes. When you inevitably fall in because of the terrible controls, the game tells you that rabbits can’t swim. (They totally can).

Later on, when exploring a misty swamp, I get lost thanks to the nonexistent signposting. I run for so long that I find the boundary, an invisible wall shunting me back into the big, empty level. There is some water here, being a swamp and everything, and for some reason I can fully submerge myself and walk beneath its surface like I just sprouted gills. The developers added the water to fill out the level, hoping you wouldn’t venture that way and notice it. In this world, rabbits die instantly upon contact with water. Apart from when they don’t. Got it? Cheers. 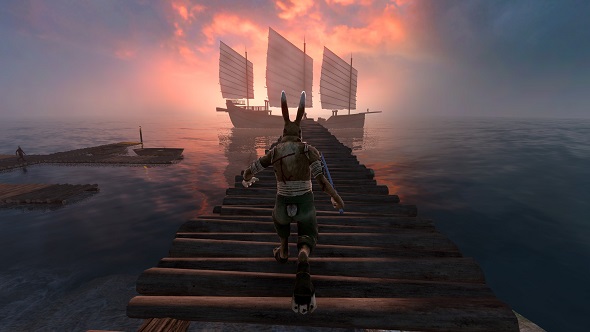 These little niggles fill the game, right on through to the menus. Overgrowth feels best on a gamepad, thanks to its wall-running, Prince of Persia-inspired platforming, but the gamepad just doesn’t work in the menus. Pause the game and your controller becomes useless, forcing you to hop between pad and mouse. It feels far from finished, despite that lengthy development time.

In combat, you are either holding a button to attack, pressing another button to throw an enemy to the floor with a counter attack, dodging, performing a jumping strike, or throwing a weapon, if you have one, at an enemy. That’s all there is to it. Enemies surround you and batter away relentlessly. One sword swipe kills you. Jumping attacks often aren’t worth the risk, as the damage from landing can end you. You just hold a button and hope for the best, willing your animations to interrupt the animations of the dogs, rats, wolves, rabbits, cats, and other animals attacking you, occasionally running away and diving in with some cheap jump kicks out of desperation. There is no lock-on, everyone is just running around, flailing at each other. It is about as satisfying and graceful as hammering a nail into a fence with your face.

You can use stealth to choke enemies out or draw a blade across their throats, but the levels aren’t built to facilitate stealth at all. You can and will get the drop on enemies, but you will only do it to try to skip the godawful combat. You just want to get it over with as soon as possible. The same goes for the dialogue. It is painful, consistently so across both the game’s campaigns, in which you play as two different rabbits who are functionally identical.

It is a fighting game for the YouTube generation, where the fun is derived from its jankiness. There are a few laughs to be found in the over-the-top physics – whether you are breaking your own neck with an ill-advised frontflip or roundhouse kicking an enemy into another dimension – but that only does so much to mask the game’s myriad issues. I take no pleasure in ragging on a game someone has worked hard on for years, but playing Overgrowth is a frustrating, dull, joyless experience, and about as appealing as contracting myxomatosis.