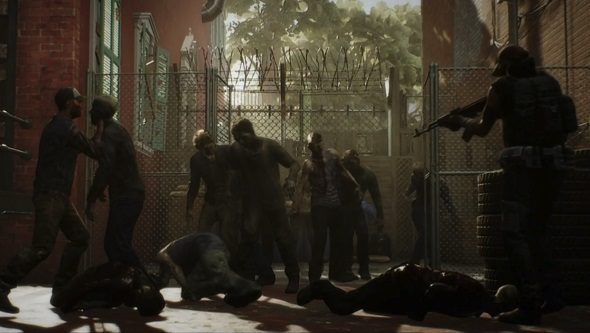 We’ve finally got a proper look at Overkill’s The Walking Dead. As you might expect from the makers of Payday, it’s a four-player co-op game that sees you face off an AI horde. Of course, this does line it up as a Left 4 Dead competitor. Though, that said, it’s not like Valve had been doing much on that front for a while.

Along with the gameplay trailer that was shown off during the PC Gaming Show, we also learned the release date. November 6 for the US and November 8 for the rest of the world.

Catching up on the conferences, read our comprehensive E3 2018 guide.

The trailer showed players not only clearing a parth through the zombies blocking their progress, but also using zombies to their advantage, shooting the locks off gates to release a horde, presumably to harass more living enemies.

You don’t have to wait long to preorder, if that’s your style, then you don’t have long to wait – preorders open today. I don’t know how you’ll deal with the hunger of five months waiting for your co-op zombie shooter, probably by playing Left 4 Dead.

You can watch the gameplay trailer for yourself below:

I certainly have room in my life for some more zombie co-op shooting. Especially if we get to intersect with some of the stories of the Walking Dead universe.